Los Angeles, CA -- (SBWIRE) -- 08/27/2014 -- Back with the third single off his forthcoming Too Dope album, Chicago rapper Philosopha offers up another round of new-age hip hop in his latest track, "Strong". A laid back track in which Philosopha conveys his certainty of becoming the next biggest artist out of Chicago, "Strong" also hints at certain aspects of his lifestyle.

The new single is now available at: Soundcloud.com/Philosopha/Strong

Produced by emerging hip hop producer Trill Gates, the rhythm and feel of "Strong" is reminiscent of early 8 Ball MJG and UGK with a fresh modern twist similar to that of Migos, Young Thug or Rich Homie Quan. With an almost anthem-like feel, Philosopha immediately goes into a bouncy hip hop flow that's backed with heavy bass in this solo debut. The official music video for Strong will be released September 16th along with Philosopha's album debut, Too Dope.

The much-anticipated Too Dope will feature 14-tracks from the crafty wordsmith with special guest appearances by Mikey Dollaz and Castro. His first two singles, "All I Know" and "Work" have garnered the attention of several national hip hop blogs and his music videos have also been featured on popular websites like WorldStar Hip Hop.

About Philosopha
Chicago is a melting pot for musical talent meshing many different styles and influences. Philosopha embodies the pulse of Chicago by delivering the raw energy and passion that made the Windy City famous Worldwide. Philosopha takes fans on an emotional rollercoaster ride with a high octane stage show, party anthems, and club hits that can get any crowd out of their seats. Giving the listener a unique experience, Philosopha draws comparisons to the street savvy of T.I., the Migo's edginess, and Andre 3000's creativity. Philosopha has opened up for some of the industry's most popular names in Hip Hop. 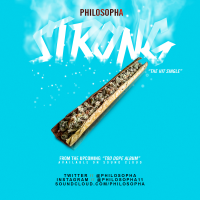