The Reggie's Battle of the Bands show is a hodgepodge of Chicago and other Illinois-based bands that are uniting under one umbrella of musical sounds: rock ‘n’ roll. Each band rocks their own unique spin on the genre and rolls with their sets, each song and group seamlessly progressing to the next. With 30-minute sets apiece from 3:00pm until the music stops rocking, at 9pm, the bands will provide an evening’s worth of quality entertainment suitable for anyone looking to move and feel the music coursing through their veins.

Pre-sale tickets are used to determine each band's draw to the show. Each band's draw determines what time they will play throughout the evening. Judging is done after the last band performs by crowd response, two bands will advance to the finals to join the other finalists.

Zoo’s version of rock ‘n’ roll stands out in its own way. The band is comprised of both Damon Karner and Derek Dare on lead and rhythm guitars and lead and backing vocals, Matthew Coglianese on bass guitar and backing vocals and Noor Al-Banna on drums. They claim many influences, including Jimi Hendrix, Led Zeppelin, Black Sabbath, Allman Brothers and Funkadelic, all of whom the group is often musically compared to. Other notable influences include Biggie Smalls, Black Keys, Herbie Hancock, A Tribe Called Quest, Iron Maiden and The Beatles.

The momentum behind their surging rock and power-packed lyrics comes from a variety of inspirations, from life, death and suicide to girls, nature and good times. What drove them to pick up music and start playing together were family and friends who play music as well as a tug of loneliness in moving to a new town—the band was a place for the quartet to come together as a focused rock ‘n’ roll unit. Despite busy work and school schedules, they always find a way to practice together at every free opportunity to stay motivated about the music and to fuel creativity, imagination and inspiration.

That drive and creativity came into fruition in September 2013 when they recorded and released their self-titled debut EP, a five-track collection of the some of the finer points of the sound they created together.

The band’s track “Maj” exudes a jamrock feel with powerful energy and a bounce in its beat—the kind of sound that makes the crowds rock out at all of their kinetic live performances. The track will be featured on WiFi PR Group’s Indie Anthems Vol. 5, a digital mixtape of indie talent from across the musical spectrum. The mixtape’s limited amount of download codes will be handed out at Coachella in April 2014. Check out this track and others, such as “Funkasass,” on their YouTube, SoundCloud or bandcamp pages.

To attend this epic Battle of the Bands and Chicago rock extravaganza on January 12, 2014 head on over to Reggie's Rock Club located at 2105 S State. Street Chicago IL. Tickets are available for $10 in advance and $12 at the door. This will be an all-ages show. Show starts at 3:00 p.m.

About WiFi PR Group/AudioBullet
AudioBullet is the music branch of WiFi PR Group, www.wifiprgroup.com, based in Los Angeles, CA, and is an innovative marketing force in the interconnecting worlds of Philanthropy, Business and Entertainment. Specializing in digital publicity and branding, AudioBullet works closely with its clients to create full service artist development and music promotional campaigns. 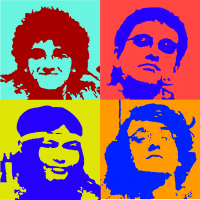