Loveland, CO -- (SBWIRE) -- 05/08/2012 -- Over the years, some of the most popular children’s books have included animals as their main characters. From an amazing spider named Charlotte to a kindly stuffed bear named Winnie the Pooh, many children’s book authors truly understand the love that most kids have for animals of all kinds.

Author Dani Marie definitely appreciates the connection that children have with animals. The popular and prolific writer also realizes that writing books about animals is a great way to engage children in reading.

Dani recently wrote a charming and humorous story about one of her own pets—a very special young chicken named Peanut.

When Dani adopted Peanut in October, 2008, she was immediately struck by how the adorable white chicken had a distinctive quality to his appearance. Specifically, Peanut does not look feathered, but fuzzy!

After the two of them bonded and started going on a variety of adventures together, Dani knew she had to write a book for kids about her unique pet who stands out from the rest of the flock.

Peanut the Fuzzy Chicken is already getting a lot of attention for its humorous and charming story expertly combined with the subtle message that appearance does not matter and should never prevent anyone from having a great time in life.

The book, which is now available on Amazon.com, includes colorful and whimsical illustrations that help tell the story of the very special chicken who doesn’t care that he does not look like any of the other chickens—he is too busy playing games and having fun.

“He runs all over the farm, does chores, goes in the house to eat snacks and in farmer Melanie’s truck for rides!” Dani wrote in a description of the book.

“He’s such a brave chicken that he even becomes a hero when he saves the chicks! Peanut thinks his life is pretty swell.”

When Dani is not busy writing children’s stories and other children’s literature, she and Peanut enjoy spending time together. Because Peanut’s favorite place to be is inside Dani’s house, she has outfitted him with chicken diapers that he wears while running around the house, playing on the carpet and trying to get food from his favorite human.

About Peanut the Fuzzy Chicken
Dani Marie is an avid writer and enjoys making people smile with her work. Her pet chicken Peanut is her buddy and inspiration for her children's series Peanut the Fuzzy Chicken. The adorable children’s book, which is now available on Amazon.com, tells the story of how Peanut’s curiosity leads him to meet new friends, make fun discoveries, and even become a hero in the process. For more information, please visit http://peanutfuzzychicken.com 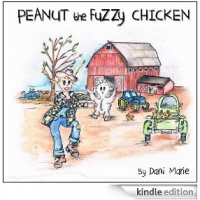