Lake Forest, CA -- (SBWIRE) -- 01/05/2012 -- Over the past decade, America and the world have seen a tremendous amount of turmoil. From natural disasters and the terrorist attacks of September 11th to the collapse of the real estate market, the economy, wars in Iraq and Afghanistan, and a presidential seat up for grabs in what is promised to be the ugliest campaign in the countries history, people have had to continually react to a host of unstable and alarming events. What’s more, with a national debt crisis and the unemployment rate at an all-time high, it is hard to know where to look to for answers.

Christian rock and folk rock singer/songwriter, Michael Paul Scally may be the only songwriter who is taking a stand and openly writing about these issues and events. Michael Paul Scally recently released a new music video for his folk rock song “America is in Trouble” (the “America” album, label - Salvation Rock Music Company) which has garnered a lot of attention for its controversial subject matter and Scally’s status as one of Southern California’s top studio musicians. Currently available for viewing on YouTube.com (search “America is in Trouble” and see The Statue of Liberty), the video expresses the rapid decline of America’s present social, political and economic status as seen through the eyes of a Christian songwriter. It features images of war, headlines of political corruption as well as unbelievably bizarre images from San Francisco’s Gay Pride Parade earlier this year.

Michael Paul Scally wrote, arranged, engineered and played all of the instruments on the “America” album, which took him 18 months to complete and with the exception of the vocals on “Give Him Your Heart,” literally everything you hear on the album is MPS, right down to the final fade of track 10. The 10-track album, which features “America is in Trouble,” is part of a two year, two album deal with Salvation Rock Music Company (Orange County, Ca.). According to the label, which represents Christian rock bands, “America” is the strongest album they have been involved with this year.

The newly released album and music video for “America is in Trouble” represents Michael’s opinion of the state of the country and, as he puts it, “shows the darker side of America.” His thoughts are evident in the chorus of the song, which states, “America is in trouble, no one seems to care, it’s all inbred corruption, you see it everywhere.”

Other songs on the album that touch on similar issues include “Battlefield of Dreams,” “The Reward,” “Light of the World,” which addresses terrorism and children suicide bombings, and “America,” which showcases MPS’s other arrangement skills with a classical track reminiscent of Tchaikovsky or Rachmaninoff using historic voices of the 20th century and floating them in and out of a haunting orchestral arrangement.

In December, Michael Paul Scally is scheduled to be featured in one of the UK’s biggest musician magazines Fireworks Magazine and a follow-up music video to “America is in Trouble” is currently in production.

Finally, what’s interesting to note is how close the album came to not happening at all. About midway through, he and his family lost their home and he nearly scrapped the whole thing but felt the Lord gently encouraging him to finish it, which he did in a studio not much bigger than some people’s closets.

To purchase the entire “America” album or one of its 10 tracks, including “America is in Trouble,” visit http://www.SalvationRock.com 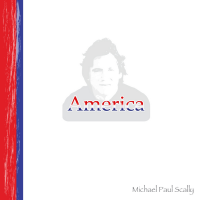