One of the most endearing DIY projects you'll encounter this summer has launched.

Berkeley, CA -- (SBWIRE) -- 07/03/2013 -- In the spirit of what has always made them happiest, identical twin sisters Sarah and Claire Bowman, aka The Bowmans, have decided to base their next project on something close to their hearts: Christmas. This undertaking will be the first to combine Sarah's acclaimed songwriting with Claire's distinctive artistic works, which will be brought to bear as a 12-track Christmas album coupled with an original illustrated story book.

The Bowmans launched a Kickstarter.com campaign on July 2nd to run through July 31st in hopes to raise funds and promote this exciting and heartwarming new project.

Ever since they were very little, the previously inseparable siblings have made up songs and stories together. (Two of these songs even appear on their recent albums.) Since then, they've performed together on over 1,000 stages across the U.S. and Europe. And yet, the sisters live 6659 miles apart (Berkeley, CA to Stans, Switzerland), which is an unnatural distance for twins. Today, they come back together to revive their most profound moments as sisters.

Sarah evokes universal nostalgia and rejuvenates the holiday spirit in the songs she wrote for the new album, which is comprised of six original Christmas songs and six fresh arrangements of the twins' favorite traditional carols.

In recent months, Claire has been cultivating her odd and whimsical art. Inspired by one of the new songs, Claire wrote and illustrated a charming story about an adorable little evergreen that wants to grow up to be a Christmas tree.  If the project is funded, the book and CD will be available fittingly in time for Christmas.

The project relies on the contributions of new and existing fans. If the $30,000 goal is not reached, the sisters will not collect a cent from their backers. But the alluring project looks likely to succeed and has already been identified as a Kickstarter Staff Pick, perhaps due in part to their engaging and valuable rewards.

The Bowmans will be performing songs from their previous three records throughout July in California while promoting their Kickstarter campaign. Dates are listed on their website http://www.theBowmansMusic.com 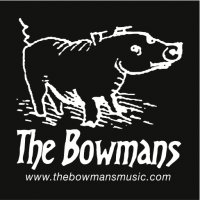 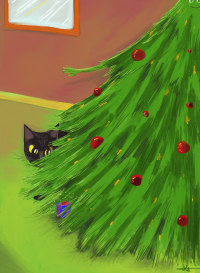