‘Christmas Nevermore’ explores pertinent themes of culture, family and the impact of industry and humans on the earth’s natural resources. By depicting the dramatic downfall of Christmas itself, Cadieux and Bastien have developed the perfect narrative from which families can discuss these vitally-important issues.

Los Angeles, CA -- (SBWIRE) -- 11/07/2013 -- Los Angeles, CA – What if Christmas ceased to exist? While it may first sound implausible and even outrageous, a powerful new ecological fable by Marc Cadieux and Herve Bastien depicts it as a very real possibility as the result of humankind’s careless actions.

The upcoming young persons’ and family novel uses this thought-provoking premise as a platform from which readers can open a dialogue into culture, family and the impact of big business on nature’s delicate balance.

The holiday season is approaching and Polik and Nika are filled with excitement. All of the children living in their Inuit village, Akilineq, are anticipating its arrival. But will this be the first time that Santa is unable to deliver his gifts on time for Christmas?

Big Oil has been drilling in the outskirts of Akilineq, affecting the locals’ way of life and culture. Even Polik and Nika are noticing the effect this invasion is having on the environment and the once majestic and untouched arctic landscape.

When the oil company accidentally begins drilling in the wrong place, a chain of events is set in motion which threatens the life of their grandfather Ikkuma, the village Shaman, and the safety of the seen and unseen. In the gigantic network of underground ice tunnels, hundreds of elves live and work alongside Santa preparing for the biggest day of the year. Polik and Nika discover that Santa’s world is melting and recent activity from above is threatening its very existence.

As the authors explain, while they hope the book will become a classic, its narrative opens the floodgates to issues that few books for young people dare explore.

“We’re trying to prove that you can enjoy an entertaining and enchanting story while learning something and firing up discussion into some very important issues.” says Cadieux.

Continuing, “Deciding it needed stunning illustrations, we engaged with Christina Zakhozhay – an artist from Yekaterinburg, Russia, who now resides in Toronto. Her imagery adds a vivid and striking new element to the message we as writers are trying to get across.”

The team is confident that the book’s message will inspire all who read it.

“The message that we strived to get across when writing this story, beside the effect that Global Warming is having on the planet, is that it doesn't take too much effort to affect change. There are two kinds of people: thoughtful and thoughtless. The message in the book is that you have to make things change; you have to think about it. If you don't do anything to change as an individual, other people are not going to do anything to change either,” he adds.

‘Christmas Nevermore’ is available now. A portion of the book’s proceeds will be donated to Sanctuary for Kids: a non-profit founded by actress Amanda Tapping and her co-stars from the SyFy series, Sanctuary. More information can be found on Facebook: http://www.facebook.com/ChristmasNevermore and the book’s website: http://www.ChristmasNevermore.com.

Marc Cadieux
Canadian born, Marc Cadieux spent 14 years in Paris working as a film director, later moving to Los Angeles to continue his writing and film career. Cadieux’s unique and stylized approach to storytelling led him to work for the iconic Tom Waits on three of his world tours. Marc extended his endeavors to include documentaries and an award-winning short film, “La Pension,” which went on to be selected for the Cannes film festival. This is Marc’s first novel.

Herve Bastien
French born, Herve Bastien began his career in film as a casting director and later as first assistant director for such prominent European directors as Jean-Paul Goude and Patrice Leconte. From there Herve began writing and adapting children’s stories and screenplays for Disky Europe, before moving into directing with his short film “Pique-Nique,” which was picked up for distribution by Europa Corp. Numerous commercials and institutional films followed. 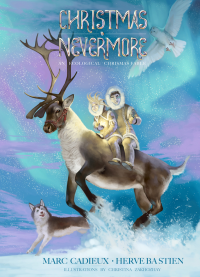