Los Angeles, CA -- (SBWIRE) -- 08/31/2015 -- Santa's best helper and beloved Christmas rapper Robby The Elf is releasing two new Holiday songs: "Don't Be No Scrooge" and his first Gospel rap track titled "Christmas Forgiveness." The first is about haters hating on the Holidays, and the latter is to generate awareness and funds for missions at Saint Mark United Methodist Church in Taylors, SC. Music and videos will be released November 4.

About Robby The Elf
Robby The Elf has built a nationwide reputation since forming his Christmas crunk act back in 2005. Over the past decade the rapper from Upstate South Carolina has been spreading love and positivity with an entire catalog of Holiday originals, such as "The Meaning of Christmas" and "Magic From Elves."

"I realize that the holidays are not always happy times," he explains. "It brings sadness as well. I merely desire to help those less fortunate. That's what Christ did and Saint Nicholas also. I don't expect to be compared to those two, but I want to do my part. If I can bring a smile to a sick child's face, or ease sorrow in someone elderly, then I consider that a success."

Love him or hate him, Robby The Elf's mission is also to spread awareness about the repression of elves, showing people that elves are an important part of maintaining a positive holiday spirit.

"My goal is to have everyone to hear my music so that someday, each Christmas Eve, every child will also leave, a cookie for an elf." 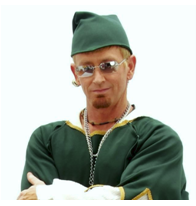