San Jose, CA -- (SBWIRE) -- 11/06/2012 -- Five Pet Place, a producer of designer pet products, today announces Mr. Nuts, a cat with a track record of accurately predicting the outcome of future events, has projected Mitt Romney to be the loser of the 2012 presidential election.

According to company founder Michael Ostrofsky, Mr. Nuts was provided with two identically prepared litter boxes to make his selection. The boxes were placed next to each other. One designer cat litter box was designated for Romney. It was placed to the right based on the candidate's political philosophy. Another box, placed to the left, was designated for President Obama. "The right left thing was as scientific as we got," said Ostrofsky.

In a bit of a twist, the box Mr. Nuts chose determined the loser. "Normally, you'd think he'd be picking the winner," said Ostrofsky. "But when it comes to Mr. Nuts, any time you're dealing with him and his litter boxesyou lose."

A Cat Who Knows His Business

Mr. Nuts made his first prediction before the Pittsburgh Steelers played the Green Bay Packers in Super Bowl XLV in February, 2011. Despite living in a house full of Steelers fans, he correctly picked the Steelers to lose. The following year, he predicted the New England Patriots would lose Super Bowl XLVI. He's also picked the Detroit Tigers to win the World Series.

As with all things political, jokes and controversy surrounded the selection process.

"When I told people about this, one of my Mom's friends, who's a big time liberal, said the outcome was going to be rigged so Obama would lose," said Ostrofsky. "Said I was going to pander to the 1% who buys my company's products. Then her husband joked the Ron Paul people would be upset because there wasn't a third box for him.

A relative back east, a big time Rush Limbaugh type, said of course he'd favor Obama because he's 'a California liberal who sleeps all day yet expects people to provide him food, shelter and medical care for free.'

Finally, a neighbor who stopped by for a beer saw him cleaning his backside and asked what the meaning of that was. I said it meant he was trying to wash the taste of Mom's meatloaf out of his mouth."

Meet the Cat with a Stupid Name

A large black and white "tuxedo" cat, Mr. Nuts adopted the Ostrofsky family approximately two years ago. "My parents would see him walking around the neighborhood," said Ostrofsky. "Then he showed up in their yard. Then he charmed his way inside. He's quite the character.

He throws up all the time, stinks up the house with his king-sized dumps which he doesn't bury because they smell so bad -- then goes outside and pees all over the yard. On the flip side, even though he's a big and intimidating looking cat, he's actually quite gentle and loving. He's Mom's lap cat. They watch Jeopardy and Wheel of Fortune together every night -- and he just purrs and purrs the entire time. He gets along great with all their other cats, too.

During the day, he sleeps in a heated cat bed with his paws in the air and tongue hanging out. He loves his cat scratchers and goes wacky over catnip, too. Instead of drinking water out of a bowl like a normal cat, he goes and sits in the kitchen sink until Mom or Dad turns the faucet on for him."

Regarding his unusual name, Ostrofsky gave the background behind it. "When my parents first got him, he handsome rather prominent, shall we say, manly bits so I started calling him Mr. Nuts. Then my parents got him fixed and started calling him The Old Guy because his estimated age is something around 10 or 11. Besides, Mom and Dad thought his other name was kind of stupid."

About Five Pet Place
Based in Mission San Jose, California, Five Pet Place specializes in producing the world's finest luxury cat furniture. Made in America to a standard instead of a price, the Five Pet Place collection of stylish pet products replaces the typical cat bowls or cat feeder, cat box, cat scratching post, and pet bed with a set of?quality products cats and the people who care for them will love. 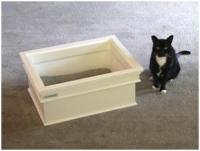