Shenzhen, Guangdong -- (SBWIRE) -- 06/27/2013 -- Le Tour de France 2013 will start on 29th, this Saturday, and the new routines will make this classic competition more interesting meanwhile attract more watchers. This is the first time that the Tour de France chooses Corsica Island (La Corse), where Napoleon was born, as the Grand départ, and also the first time to pass by Triumphal Arch. Meanwhile, the riders will also have a chance to take a look at the night scene of the famous tourist resort, the Champs Élysée.

The Tour de France is a feast for all the bicycle riders, and this annual competition always attracts thousands of riders and millions of watchers. As one of the three major tours in the world, the Tour de France seems to be more famous than the others, GIRO and Tour of Spain. All the riders are eager to take part in this competition. Mark Cavendish said, “There’s a chance for me to wear the yellow jersey. And for all the other sprinters it’s a first opportunity for a sprinter to wear the yellow jersey since the 1960s. So it’s going to be all guns blazing there. It’s going to be exciting and hopefully I can wear that jersey.” The words show Cavendish’s confidence and also show the rider’s desire to participate in this race.

Andy Schlek and Alberto Contado, likely to be the most competitors of the champion, all missed 2012 Tour de France, but returned this year. And the teams which these two guys are in, RadioShack-Leopard and Saxo Tinkoff, are both equipped with the best riders they can get. So this Tour de France 2013 will be excellent and you will never want to miss it. 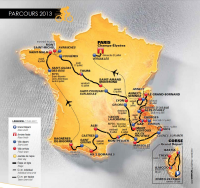