The National Institutes of Environmental Health Sciences released a statement on the conclusions of the panel for each endpoint found here https://ntp.niehs.nih.gov/ntp/about_ntp/trpanel/2018/march/actions_508.pdf.

The peer review panel voted that the malignant schwannoma tumors found in the heart of male rats be scientifically categorized as "clear evidence of carcinogenicity" and that the malignant gliomas found in the brain of male rats be categorized as "some evidence of carcinogenicity." In addition, they voted that the increased tumors of the adrenal medulla in male rats exposed to the GSM type of cell phone radiation be categorized as "some evidence of carcinogenicity," adding a new type of tumor thought to be caused by the exposure. The expert panel advised strengthening the conclusions regarding seven different health effects. The panel called attention to statistically significant increases in an unusual pattern of cardiomyopathy, or damage to heart tissue, in exposed male and female rats. The panel highlighted that in Italy a recent animal study on radiofrequency radiation at much lower radiation levels than the NTP study found the same types of rare malignancies.

In addition to the heart and brain cancers, statistically significant increased numbers of tumors were found in other organs at one or more of the exposure levels studied, including the prostate gland, pituitary gland, adrenal gland, liver, and pancreas.

"What should happen now is the FDA should be immediately working on developing a quantitative risk assessment from this data and in the meantime the FDA, FCC and other agencies should promote precautionary measures for the population—especially for children," said Ronald Melnick PhD, who lead the design of the NTP study in his 28-year career as a scientist at the National Toxicology Program. Melnick is currently senior advisor to Environmental Health Trust(EHT).

"Enough is enough, how many more deaths would be needed before serious action is taken? Evidence just continues to accumulate. On March 28, 2018, the external peer reviewers of the National Toxicology Program voted to increase the level of evidence for the causal role of radiofrequency radiation for several tumors and other negative health effects. It's time for action," commented Annie Sasco MD, DrPH, former Chief of Research Unit of Epidemiology for Cancer Prevention at the International Agency for Research on Cancer of the World Health Organization and medical advisor to EHT.

"The NTP study found far more than evidence of cancer. Animals exposed in their lifetimes to the same amount of radiation that a human can receive in theirs gave birth to smaller babies with more defects in their hearts. What also makes these results especially compelling is the fact that all well-designed studies of people with 10 or more years of exposures to cell phones find higher risks for comparable tumors—gliomas and acoustic neuromas. Yet exposures continue to increase every day in schools and homes throughout this nation as children are handed two-way microwave radiating devices to use next to their young developing bodies," stated Devra Davis PhD, MPH, Visiting Professor of Medicine at Hebrew University and President of Environmental Health Trust, who added, "the Ramazzini Study published this week in Environmental Research found statistically significant increases of the same rare cancers as found in the National Toxicology Program study, but at radiation levels significantly lower than those of the NTP. Combined, these two studies strengthen the case that this radiation is a carcinogen. Cautionary action is urgently reduce exposures for children and the rest of us. As the chairman of our Business Advisory Group Frank Clegg, former President of Microsoft Canada, has advised: 'I come from a smart industry. Tell us what we need to do and we will get it done.'"

"This animal evidence, together with the extensive human evidence, coupled with the rising incidence of brain cancers in young people in the U.S., conclusively confirms that radiofrequency radiation is a Category 1 human carcinogen," explains Anthony Miller MD, University of Toronto Dalla Lana School of Public Health Professor Emeritus, medical advisor to EHT, who has served as an advisor to the World Health Organization.

"The peer reviewers reviewed the tumor data in a transparent scientific process. This landmark U.S. government study, in addition to the recently released Italian Ramazzini study, provides the scientific evidence governments needs to take swift action to protect the public," said Theodora Scarato, Executive Director of EHT who added, "The rollout of 5G small cells must be halted. Schools need to install wired internet networks. Communities should have maintained landlines. Solutions exist such as ethernet and fiber optic networks. Public Health Departments need to initiate public awareness campaigns to educate the public on how to reduce exposure. People need to understand just how easy it is to use safe wired technologies, especially at home. Employers need to prioritize this issue and make changes in the workplace to limit and minimize workplace exposures. We have a responsibility to future generations to take action on this issue now."

"Can your cellphone cause cancer? Scientists find definitive link in study of rats" The News and Observer March 28, 2018
http://www.newsobserver.com/news/business/health-care/article207112454.html

The Nation: How Big Wireless Made Us Think That Cell Phones Are Safe: A Special Investigation: The disinformation campaign—and massive radiation increase—behind the 5G rollout. By Mark Hertsgaard and Mark Dowie, The Nation, March 29, 2018
https://www.thenation.com/article/how-big-wireless-made-us-think-that-cell-phones-are-safe-a-special-investigation/ 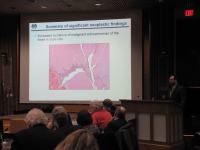