Screening and awards were scheduled for Saturday, June 22, at The Whitefire Theater in Sherman Oaks, CA.

“The Los Angeles International Underground Film Festival celebrates the efforts and accomplishments of true underground artists from around the world,” says the festival’s website. These include “filmmakers ... who capitalize on their creative intuition to create memorable and inspiring pieces of work when major budgets do not exist.”

The documentary chronicles the life of Mary “Mickey” Wright, who began her career as a professional racecar driver seven years ago, at the age of 45. Wright had to overcome her own fears and the prejudices of fellow drivers in a predominately male sport on her way to breaking track records and earning her position as a top-ranked racecar driver.

Hank Charneskey was the director of photography and editor for the 45-minute documentary.

“It’s an incredible rush to win in our first film competition,” said the director upon learning of the award. “We spent a year filming and editing this project, and we are so pleased to earn this recognition.”

VonHenry Media currently has several other projects in the works, including commercial features, art projects, and documentaries, and they regularly assist small businesses in producing economical videos for company websites and YouTube channels and link to Go Mickey Go Film Trailer: http://youtu.be/9xnbkk00dA4 Learn more about Von Henry Media at http://vonhenry.com 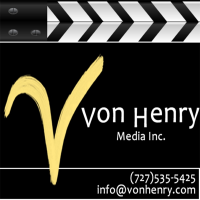