Telling the alluring tale of an elderly woman who is still on her quest to find love, Elaina Davis’ latest novel proves that life’s journey, not its destination, boasts true beauty.

Baltimore, MD -- (SBWIRE) -- 11/07/2012 -- At its heart, ‘Clever Little Book’ is a lesson to all; not to forfeit life’s beauty and wonder over concern for its final destination. Told with compelling depth and power, the latest spiritual mystery novel from Elaina Davis is taking the literary world by storm.

“Clever Little Book is a whimsical fable about a woman named Isabel who at 80+ years old is still on a quest to find love. As she stands down at the dock daily believing her love will one day come in on a ship, she learns through adventure, drama and fantasy that love is not primarily romanticism as she had once believed.

Although a simple and childlike story on one level, Clever Little Book has a disarming and beguiling depth to it that will entrance readers of all ages. Its tone is universal and can and should be embraced by people of all races, creeds and religions. At its core it's a story that urges its readers to live in the moment, and to not forfeit the beauty and wonder of life's journey with over concern for the final destination.

This story has been compared to "The Alchemist," by Paulo Coelho.”

As the author explains, her book offers more than just an engaging story.

“While simple enough for a child to read, Clever Little Book is chock-full of life lessons and encouragement that all will appreciate,” says Davis, who works as a Correctional Officer.

She continues, “The book uses much terminology that Christian readers will recognize and enjoy, but it is all under the guise of a love story so even someone who has no concern for scripture will enjoy reading the book. It is a book that is suitable for all audiences.”

Since its publication, praise has been flooding in from around the world.

“Very Moving. Reminds you of how you tried to fit in to get one's love, when all they wanted was the TRUE you to love,” says Elena Ferriera from Baja Cali, Mexico.

Another reader - Steven Adeyoyi-Aji from Nigeria, West Africa – was equally as impressed: “...a compelling piece of literature, witty and didactic! You can't stop reading it once you get started.”

While experiencing huge success, Davis remains focused on what is really important.

“I always remember that the book’s real value is its underlying message; one that will encourage, enlighten and uplift all who read it. My book is changing lives both in the United States and around the world – I am extremely proud of its success,” she adds.

Clever Little Book, published by CreateSpace, is available in both paperback and digital formats from the following retailers:

The author’s progress can also be followed on social media.

About the Author: Elaina Davis
The Author was born and raised in Newark, NJ donned, “The Brick City.” In the early days she co-hosted the once popular radio show, “The Hair Show w/Kerry Hines,” which was syndicated in New York, New Jersey, Philadelphia and Atlanta. Soon after she served as co-anchor to Juan Nortez at WSOU. Having enjoyed broadcasting she realized that she better enjoyed writing the commercials and periodicals. Her passion though is for writing books. This freshman novel is fast gaining popularity among literary lovers and critics alike. Elaina's writing style has been compared to some of the greatest literary artists of our time. 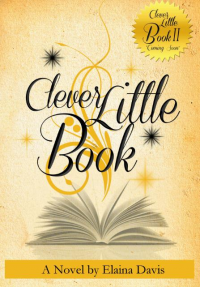