Dawn Till Dusk, chronicles a sonic journey of a single day, painting a landscape through the guitar. Fans of ambient music , from artists such as Brian Eno will love these tracks from an inspirational artist.

About Conrad Goode
Conrad Goode is an actor who was discovered in New York City and had his first gig with SNL legend Joe Piscopo in a Miller Lite commericial which led to several other jobs with major SNL cast (Tracey Morgan, Adam Sandler, Chris Farley). Conrad has been featured been in several award winning movies including Con Air, Don’t Say A Word, Me, Myself And Irene, and The Longest Yard. Conrad has also written, acted and produced his latest film entitled Watercolor Postcards to be released in the summer of 2014. The movie stars Bailee Madison (Bridge To Terabithia), Laura Bell Bundy (Country Music Star), Jonathan Banks (Breaking Bad), and John C. McGinley (Scrubs, Platoon). You can follow Conrad on 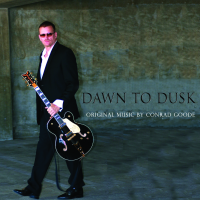