"What is the point in learning facts when the most important facts clearly mean nothing to our society. . . Since our leaders are acting like children, we will have to take the responsibility they should have taken long ago."

Attention was riveted on the plain spoken youth. The Polish paper printed Greta's presentation above the piece on Attenborough and left of the piece about the UN Conference.

This was not supposed to happen. The young Climate Change activist had arrived in Katowice, Poland, in their electric car driven by her father, Svante, at the urgings of Stuart Scott of ScientistsWarning.org. Stuart had worked his network to secure unused passes for their entry. Once inside, the UN Secretary arranged for a private meeting with Greta that Svante recorded for us. The Secretary gave the pair passes to stay for the second week. He put Greta on the Agenda to speak to the assembly.

On a subsequent Scientists Warning panel with Greta, Marten Thorslund tells of a We-Don't-Have-Time cameraman walking by the Parliament House in Stockholm on a gray August day and finding Greta Thunberg sitting alone against the granite blocks of the foundation of Swedish power. Dressed in a flannel shirt, leopard spotted pants, white socks, bright blue sneakers with daypack and water bottle, Greta had propped next to her a big black and white cardboard sign in Swedish saying School Strike for Climate.

"We kids don't usually do what they tell us to do. We do what we do. Because you don't give a damn about my future, I won't either. My name is Greta and I will school strike until the Swedish Election Day."

Greta's message went out. Everyone in Sweden now loves Greta. Students across the UK walked out of their schools to make it known that their futures were being stolen so that adults could live in luxury today. On the last Friday of November, thousands of schoolchildren across Australia walked out of class to demand action by the federal government on climate change. Says Greta: "A crisis should be treated like a crisis!"

Greta happens to be third cousin, fourth removed of Svante Arrhenius, the Swedish scientist credited with alerting humanity in 1896 that it's CO2 emissions would heat the planet.

On Moir's Environmental Dialogues on Thursday, January 10 at 3 p.m. Eastern Time, Rob will present Greta talking to the UN Secretary, the Assembly, and clips from two panel discussions, one with Greta and Svante, the other with Greta and Marten Thorslund. There will be opportunities to call in during the broadcast. 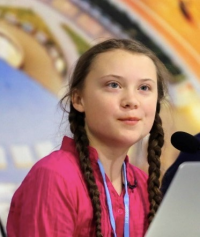 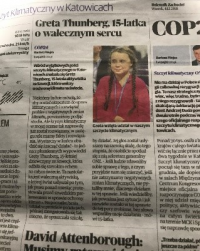 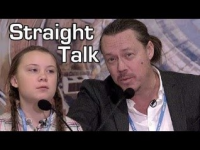 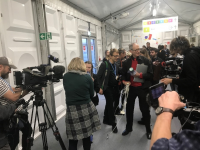