The Cognichrome, led by Gene Ekster, is a new art project that will allow a user to paint an actual art piece on a canvas using only their thoughts. This Brain to Computer Interface (BCI) utilizes an EEG, machine learning, and a robotic painter to create one-of-a-kind masterpieces.

New York, NY -- (SBWIRE) -- 01/28/2014 -- The Cognichrome (http://www.Cognichrome.com), being developed by Gene Ekster with a degree in Artificial Intelligence and Cognitive Science from U.C. Berkeley, is a robotic art installation that utilizes a user’s brainwaves and thoughts to create an actual painting on canvas. The Cognichrome uses an electroencephalogram (EEG) worn by the user which detects brainwaves which are then interpreted with machine learning algorithms and communicated to a robotic painter. The Cognichrome interprets actual emotions in real time as the user interacts with the installation. The user’s emotions are stimulated through various sensory interactions with the machine. These emotions create the painting which the user can then take home with them.

Gene Ekster, believes that the Cognichrome sparks the creation of a new category of artistic experience. “Most of us have spent a great deal of time trying to force machines to understand our intentions. I truly believe that as technology advances, computers will understand intentions so subtle, that we weren’t even aware of them to begin with. The Cognichrome aims to show that this union between man and machine doesn’t have to be frightening, it can be beautiful.” said Ekster. He continued, “As the user paints his or her art, there is a continuous bio-feedback loop which stimulates their brain with provoking videos and the painting itself. All of this results in a one-of-a-kind ‘brainwave’ painting that can truly be thought into existence.”

The Cognichrome uses a “behind the scenes” interpreting program which employs unique algorithms to produce the final art piece. All of these different aspects of the Cognichrome make the device remarkably innovative - a true robotic painter powered by human brainwaves.

The Cognichrome is currently being actively developed and there has been noteworthy progress including fully functional EEG and software components. When finished, the Cognichrome can be used anywhere to promote art and science, particularly festivals and art shows.

About The Cognichrome
The Cognichrome (http://www.cognichrome.com) is an art installation which reads a person’s brain using an EEG and instructs a robot to paint the interpretation of the user’s thoughts on a real canvas. The painting evolves as the wearer is mentally interacting with the device, as their mind is exposed to new videos from the device’s monitors. 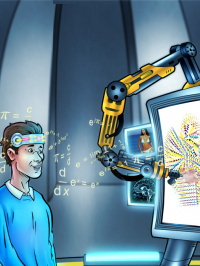