Providing a literary fine line between fiction and reality, Nick C. Roberts’ latest novel and collection of short stories are giving readers around the world some serious food for thought.

Helsinki, Finland -- (SBWIRE) -- 12/12/2012 -- Unlike most fiction authors, the work of Nick C. Roberts gives readers an opportunity to travel the world, ponder contemporary societal issues and even gain exposure to a myriad of different cultures. With two new books recently hitting the market, Roberts’ work is now poised to reach more people than ever.

The two books offer a fresh and insightful read. With suspense-thriller ‘Collision Bound’ and ‘Burnt Forest and Other Stories’ (a collection of thirteen brief and haunting tales) readers are spoilt for choice.

Synopses:
Collision Bound: Tero Bindon-Green is a man on a mission. Guided by the ‘voice’ of a dead friend, he plans a cold blooded killing. As the action switches between the wintery streets of Helsinki and the crowded London Underground, Tero finds himself embroiled in the machinations of others with murder on their minds. This gripping tale takes place against a backdrop of Christmas and New Year, with readers being shuttled breathlessly between the Finnish and British capitals.

Burnt Forest and Other Stories: These short and riveting stories pitch often ordinary men and women into extraordinary situations with dramatic results. Set in England, Australia, Germany and Finland, each is a mixture of menace and suspense with a touch of lightness and humour in parts. In ‘Steam Heat’, a London businessman feels compelled to take radical steps to protect his only daughter, who has become infatuated with an Italian gangster.

In ‘Settling Accounts’, a naval war veteran plans sweet revenge on a despised former shipmate who cheated him, when the latter arrives in his town out of the blue. In the title story, ‘Burnt Forest’, a chilling threat from a strange man puts a young female backpacker in Australia in mortal danger.

As the author explains, a variety of real-world contemporary issues form common themes throughout his writing.

“Topics such as mental health, morality, revenge and greed feature strongly. In addition, because the stories involve a range of countries and nationalities, cultural differences play a part too,” says Roberts, who is originally from the United Kingdom.

He continues, “Typically, mainly ‘ordinary’ people find themselves caught up in the world of drugs, organised crime or terrorism.”

This fast-paced yet vividly real world is perfectly encapsulated in ‘Collision Bound’, where the action switches from Helsinki to London, as a schizophrenic hit man becomes unwittingly ensnared in a radical Islamist terror plot.

“It’s all about giving the reader an opportunity to experience situations and scenarios they are unlikely to find themselves in, while ensuring each setting could play out for real,” Roberts adds.

Critics praise Roberts for the immersive worlds he creates, a testament to the reason he is building a strong and dedicated readership.

Both books, published by the Author, are available from Amazon: http://amzn.to/TPw1J7

About Nick C. Roberts
Nick C. Roberts was born in Keighley, England. He attended Pocklington School, York, and North London University, where he studied History, graduating with a BA Hons.

He worked as a bank official and a textile engineer, before training to become a teacher of English as a Foreign Language at Canterbury University.

He lived and worked in Australia and Germany, before moving to his current home in Helsinki, Finland. He is married with two children. 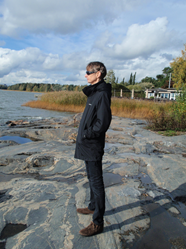