Compelling New Memoir Inspires Biological Fathers to Step Up to the 'Urgency' of Fatherhood.

Stepped Up: The Urgency for Fatherhood - By Ralph Harper.

Dallas, TX -- (SBWIRE) -- 09/13/2013 -- While there’s thousands of books on the market about parenting, none are as inspirational or heartfelt as the latest release by Ralph Harper. Unconventional yet truly empowering, the book’s unique narrative calls on all parents of ‘fatherless children’ to step up to the plate and undertake the responsibilities that can change their lives and those of their children for the better.

While uplifting, ‘Stepped Up: The Urgency For Fatherhood’ doesn’t sugarcoat the vital issues at hand. Keeping it real and telling his story exactly as it happened, Harper’s raw, hard-hitting and frankly-honest accounts depict his own experiences with vivid impact.

Synopsis: In his emotional and at times shocking debut, author, Ralph Harper shares the journey he and his stepson, Cody, took as Harper comported himself as Cody's father in the absence of Cody's biological father.

The confluence of their stories is compelling as Cody's antics as a child and as he grew into adulthood tested Harper's parenting calculus.

As the author explains, his thoughts on true fatherhood formed long before meeting Cody.

“I always denigrated my own father for not being close enough. However, after meeting Cody the realities hit me that this child was actually abandoned by his biological father. While my father wasn’t a shining diamond, at least he didn’t abandon me and my nine siblings. Cody was three years old when I met him and I made a firm decision to stay in his and my wife Sara’s lives forever. However, after an unfortunate divorce in 2000, I made a conscious choice to stay in Cody’s life and this allowed me to experience a profound revelation about the notion of parenting and the importance of fatherhood,” says Harper.

Continuing, “I saw it as the only decision and one I was privileged to make. Cody was abandoned by his father after he had sporadically endangered his life. I chose to stay in Cody’s life and he chose to stay in mine; our choices in this regard have yielded one of the most amazing journeys imaginable. This book tells that story and showcases our unbreakable bond.” Continuing, “Cody and I have been through thick and thin together and emerged triumphant. I tell our story in hopes of making a difference by inspiring biological fathers to stay or go home to the children they gave life to. The gesture could change the world,” he adds.

However, this isn’t simply sharing a story. Harper hopes to raise a vital conversation about the importance of fatherhood.

For example, Alex Guzman commented, “This book is an invitation to all the fathers to step up! The commitment and bonding that

Ralph has with Cody is really special. That is what fatherhood should be.”

Andrea Davila commented, “Ok, I haven't gotten to the table of contents yet and I'm crying already. Of course, I can cry watching a dryer sheet commercial but your dedication to your mom is so moving.”

With President Obama and Oprah Winfrey collaborating to address the issue of ‘fatherless children’ in the United States, Harper’s book could not have been timelier. Interested readers are urged to purchase their copies as soon as possible.

‘Stepped Up: The Urgency of Fatherhood’ is available now: http://stepped-up.com.

About Ralph Harper,
Ralph Harper, Chief Executive Officer of DPLOYIT Staffing. Harper has held a number of leadership roles at Fortune 100 companies including Equitable Life Assurance, Pepsi-Cola, PepsiCo and Frito-Lay. Harper has a degree in Business Administration with a minor in Computer Science from Talladega College in Talladega, Alabama.
Harper was recently named President and Chairman of the Board of Directors of the CLH Foundation, a nonprofit organization he founded in honor of his mother, Catherine Louise Harper. CLH Foundation places focus on providing a path and means for young children to achieve up to 10,000 hours of information technology training.
Harper has recently added the label “author” to his name as his debut book titled “Stepped Up The Urgency For Fatherhood” was released in late summer 2013. In this emotional and at times shocking debut, Harper shares in detail the unique relationship he forged with his stepson, Cody. 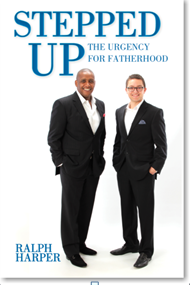