Gloria A. Swift is out to prove that not all illegal immigrants enter the United States for its rich entitlements. Fusing her own powerful life story with suggestions on how to solve the nation’s illegal immigration crisis, Swift’s heartfelt memoir is poised to resonate with readers from coast to coast.

Rialto, CA -- (SBWIRE) -- 11/07/2013 -- While over three-hundred thousand illegal immigrants land on U.S. soul each year, many seek an honest life of hard-work, contribution to taxes and their own little piece of the American Dream. Gloria A. Swift was once one of those ‘illegals’ and, through her powerful new memoir, proves just how valuable immigrants can be when accepted by society.

‘True Story of an Illegal Immigrant Who Became a Citizen of the United States’ also exposes the hardships illegal immigrants face – when all many want to do is fit in.

Illegal immigrants. What do to with them? The past two generations have become government-dependent. Why? Parents have children and that's where their responsibility ends. They do not teach their children the importance of going to school, getting an education, getting a job, and becoming somebody. Parents are on the dole, so children are not motivated to reach their true potential.

I am tired of politicians blaming teachers, conservatives, and the rich for the poor choices of others. Eliminate entitlements. My parents raised eight of us and we worked hard. Education was our ticket off the farm. There was no entitlement. Parents raised their children back then. America is the land of opportunity. I worked extremely hard to excel. Some illegal aliens want a better life and they work for it. Let's reward them for their contributions to this country.

As the author explains, trying to integrate into the United States was no easy task.

“I was exiled from law enforcement because I worked for a Chief of Police who did not want a 'nigger' on his department. Once I left the department, the Chief informed prospective law enforcement agencies that I was fired because I was a member of the Black Panther Party. Even though my performance was nothing short of exceptional, my career was ruined,” says Swift.

Continuing, “So, I went into banking and continued to slave away while others around me were promoted. I was happy to work hard as others took credit for my work - I had worked my way up from a third-class citizen to the first class – there was no way I was going back!”

Swift hopes that readers will develop improved knowledge, acceptance and empathy for illegal immigrants coming to the United States for the right reasons.

“Some only require an opportunity and they become outstanding citizens – like I did. My parents had eight children and all of us are now well-educated professional people. My book contains many strategies for solving the country’s illegal immigration issues – I hope it gives readers plenty to think about,” she adds.

‘True Story of an Illegal Immigrant Who Became a Citizen of the United States’ is available now: http://amzn.to/1iHInM3.

About the Author: Gloria A. Swift
Gloria A. Swift is a former National Board Certified Teacher who holds two master degrees and six credentials in Education. After immigrated to the United States in 1973, she served in the Army, made Specialist 5 in two years. At the end of her three-year term, Ms. Swift worked as a Correctional Officer, then transferred to another law enforcement agency where she was the first female officer on the Police Department. Despite the challenges, Ms. Swift performed exemplary but was forced to leave because of prejudice and discrimination. She did not give up and gained employment in banking. It took awhile but she worked her way up to Assistant Vice President. Currently, she is employed as a teacher imparting her knowledge to students with special needs.

Ms. Swift enjoys writing real stories that makes one thinks and acts. She does not shy from the issues that affect lives. Remembering Mama, God's Faithful Servant is a tribute to her mother who remained in a relationship despite the heartaches, only because of her belief in God and for the sake of the children. Other books by Ms. Swift include: My America, a book of poetry written after the events of September 11, 2001. It's Not My Fault: A Note to My Teachers reveals the challenges drug babies face in school and how they can be helped. Lost Innocence: True Story of Little Consuelo Saldana is the heart-wrenching story of a little girl who was raped at the age of our, horrors that continued for three years. 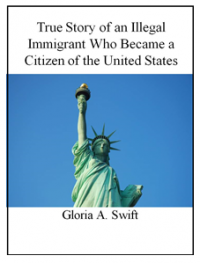