Fairfield, CT -- (SBWIRE) -- 10/07/2013 -- The Board of Directors of Competitive Technologies, Inc., today announced the appointment of Conrad F. Mir as President and chief executive officer, with full responsibility for running the corporation, and as a member of the Board of Directors. Mr. Mir will also serve as interim chief financial officer while the Board of Directors commences a search process to identify a suitable candidate to fill the role on a permanent basis.

“With Mr. Mir’s expertise in the micro-cap biotechnology space, along with his experience turning around distressed biotech companies, CTI has the right leadership in place to executive its corporate re-engineering plan and enhance long-term shareholder value,” said Peter Brennan, chairman of the Board of Directors of CTI.

Mr. Mir has been mandated to implement a corporate re-engineering plan (Plan), which he designed and presented to the Board of Directors. The Plan re-engineers CTI’s core business, cuts expenses, develops the wound care and bone technologies, and furthers our flagship Calmare© platform.

The Board of Directors also announced the acceptance of Carl O’Connell’s resignation as CEO. Mr. O’Connell has chosen to pursue other business opportunities, but will remain on the Board of Directors to provide continuity and ensure the Plan’s success. He has agreed to serve as a special advisor to CTI in various medical technology capacities, including the ongoing development of Calmare.

“Carl has a wealth of knowledge in the medical device field and will continue to be an instrumental part of the CTI team through his direction and guidance in the board room,” added Mr. Brennan.

In addition, CTI will not extend its consulting agreement with Johnnie Johnson, chief financial officer and consultant to CTI. The company is indebted to his hard work and wishes him success in future endeavors.

About Mr. Mir
Mr. Mir has over twenty years of investment banking, financial structuring, and corporate re-engineering experience. He has served in various executive management roles and on the Board of Directors of several companies in the biotechnology industry. Most recently, Mr. Mir was CFO of Pressure BioSciences, Inc., a sample preparation company advancing its proprietary pressure cycling technology. Before that, he was chairman and CEO of Genetic Immunity, Inc., a plasmid, DNA company in the HIV space, and was the executive director of Advaxis, Inc, a vaccine company. Over the last five years, he was responsible for raising more than $40 million in growth capital and broadening corporate reach to new investors and current shareholders.

Conrad has worked for several investment banks including Sanford C. Bernstein, First Liberty Investment Group, and Nomura Securities International. He holds a BS/BA in Economics and English with special concentrations in Mathematics and Physics from New York University. He is a classically trained pianist and teacher, and a student of the martial arts. He is married with two children, alumni council chairman of Tau Kappa Epsilon fraternity – Tau Alpha chapter (NYU), and a member of NIRI. 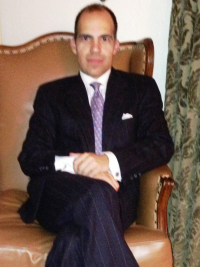