DOGGY’S inspired by active lifestyles and made from very durable and lightweight materials developed for the outdoor industry.

Los Angeles, CA -- (SBWIRE) -- 03/21/2014 -- Dogs have become people’s lifetime partner, part of their family and beloved friend. Lots of people have dogs. People love to play with dogs, take them outdoors and spend lots of time training them. However, every time they take their dog outdoors, they have to use their car to drive them to the destination and some times this trip takes long. Lots of inconveniences come along with transporting dogs in the back seat of cars.

Dmitriy Luckyr spent quiet some time on searching; comparing and analyzing similar products already existed on the market. Finding and analyzing all imperfections for seat covers gave him an idea how to improve and make it multifunctional. Several prototypes were made using different materials and slightly different designs. After several weeks of testing each prototype, he came to a decision regarding which prototype will stay and what material will be best for production.

The final prototype is made from durable high quality oxford cloth with plated PVC. This material is very durable, lightweight and easy to clean; it keeps pets comfortable in the back seat while people concentrate on the road. It is waterproof backing and will protect the vehicle's interior from the dirt, pet hair, spills and muddy paws.

The Kickstarter campaign was started to make the first production run possible after successful completion of the campaign is April. Production starts in end of May, 2014 - beginning of June, 2014. First, they will complete Super Early Birds orders and get them shipped in July, 2014. All orders will be completed by the end of September, 2014 and shipped to the backers latest in the beginning of October, 2014. 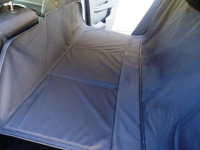 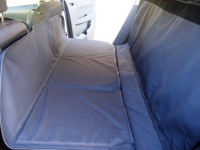