Owasso, MI -- (SBWIRE) -- 08/21/2013 -- In hopes of securing enough donations to purchase a concert grand harp Sherry Konkus of Owosso, Michigan has launched a crowdfunding project on Indiegogo. With a crowdfunding goal of $10,000 the Michigan resident will continue to pursue her dream of owning an impressive concert grand harp much like the one famed comic actor Harpo Marx played in the classic Marx Brothers films. Currently the proud owner of a twenty-six stringed harpsicle harp that she keeps in tow for live performances locally, Konkus is encouraged with the pursuit of her lifelong dream of performing music on a stately instrument. “Ever since I was a little girl, I dreamed of owning and playing a wonderful concert grand pedal harp.” said Sherry Konkus, Creator of the Concert Grand Harp Indiegogo Crowdfunding Project. “I’ve gotten close with the rental of a two gorgeous instruments, one from my home state of Michigan and one from as far away as Florida. However, to date, I haven’t been able to attain one for myself permanently. I’m hoping this crowdfunding project will change that.”

Having first had the chance to play a concert grand harp in 2003 Konkus fell in love with the beauty and integrity of the instrument. Due to minimal funds at the time Konkus released the rental of the harp and continued to refine her skills on her harpsicle. “I found it a bit limiting because there are a great many musical pieces that are arranged for harps with more strings than my own in the marketplace. Musical pieces I want to play and better my skills with however, I can’t because the small lap harp I play is simply not enough.” added Konkus.

With a determinable love for harp music and her own hard won intentionality that produces tunes for her own enjoyment as well as live performances, Konkus has her sights set on the Lyon and Healy Style 15 Semi Grand Harp. A stunningly fashioned standing harp with beautiful light stained wood and exquisite detailing. Along with the Lyon and Healy harp she is very interested in the Venus Classic Concert Grand Harp which is even more astonishing with ornate carvings and a high gloss finish replete with elegance and purposeful beauty. Typically priced between $10,000 and $250,000 the harps Konkus is interested in are substantial in any regard. However she says of the project now live on Indiegogo, “My mission is to make my dream of owning a concert grand pedal harp, whether new or preowned, into reality.”

Passionate about her love for the prized instrument Konkus is bolstered by her fan’s admiration of her courage, skills and determination. Focused on not allowing her talent to be wasted she believes a larger harp will not only fulfill her childhood dream but further allow others to be, as she further states, “...blessed by her God given gifts.”

Crowdfunding perks available on Konkus’ Indiegogo campaign are a special thank you, a video email containing a video of the harpist performing one song that has yet to be seen or heard on her medium of choice, YouTube. Perks also include a signed harp video DVD which includes an hour long performance of several songs on the newly purchased harp. Other perks include a two live concert invitations.

About Sherry Konkus
Sherry Konkus is an amateur harpist currently living in Owosso, Michigan. She has enjoyed playing the harp for a myriad of years and hopes to expand her talent in various ways including ongoing concert performances. 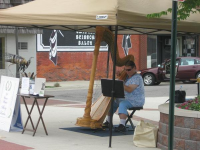 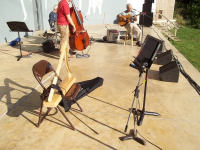