Confessions of a War Child: A Compelling Novel by Chaker Khazaal Demonstrating the Power of Love Is a War Worth Winning

Fusing reality with fiction, this one-of-a-kind novel uses mesmerizing romance and tantalizing mystery to craft a captivating thriller that will bring to light the many backstage stories of war. As a former Palestinian refugee from Lebanon now a resident of Canada, author Chaker Khazaal has travelled the world gathering a myriad of stories. In his latest novel, Khazaal humanizes war victims and encourages dialogue between communities in conflict to create peace. It’s a compelling love story set to win the hearts of millions.

Toronto, Ontario -- (SBWIRE) -- 02/26/2013 -- Unlike most fiction authors, Chaker Khazaal has travelled the world speaking to large groups of different people and collecting their personal stories. Having noticed the prevalence of war and its impact on love, Khazaal was inspired to compose a novel that takes readers far beyond the conflict of two opposing parties.

‘Confessions of a War Child’ fuses reality with fiction to provide powerful examples of the people far from the front lines. As the first installment to an upcoming trilogy, Khazaal’s ‘fictional tale inspired by true events’ will resonate with readers around the world.

Weddings signify the eternal bond between two people in love; however, when a bullet ends one marriage at the exact moment of the union, the lasting damage will throw two towns into war and a bride into a lifetime of grief. At the age of eighty-seven, sixty-six years after the fateful wedding day, Camilia has never stopped grieving the loss of her soul mate or uncovered the untold secret that remains buried deep within her being. But when the key to her secret falls into the hands of Nader, a twenty-four-year-old refugee, their paths will ultimately come together in the end. Narrated by the deceased groom, this amazing tale takes us through Camilia’s devastating past and Nader’s exciting journey to return what’s hers. Weaving a beautiful love story amidst dangerous warfare and a sense of intrigue, the novel creates a mesmerizing atmosphere that will capture readers from the very beginning.

The author explains he wants his readers to understand the wider impact of warfare on both those who fight and those who pick up the pieces at home.

“War has always been presented as conflict between two parties; Confessions of a War Child takes the reader beyond that to discover how war is actually generated. It’s a love story that brings hope to people who have lost someone, specially in war or conflict,” says Khazaal.

“War is not global, it is very local and can be found in what seems to be peaceful for us”, he continues.

The book has a growing band of fans eagerly awaiting its release. With over 150,000 Facebook fans and 35,000 Twitter followers, Khazaal is relishing the buzz that’s developed around his novel.

“I think the pre-sale success is down to the real-world relevance of the story. Many people will never be exposed to war and my book will give them the insight they both want and deserve. War isn’t pretty, but there is always hope,” he adds.

‘Confessions of a War Child’ is due for global release on March 17th. The book is available in paperback format from Amazon (ships international, available in stock) and selected book-stores globally, as well as electronically through Kindle and iTunes.

This captivating thriller touches upon numerous stories and points of view from around all corners of the world. Expertly combining a group of separate stories about multiple people into one cohesive narrative, this enthralling tale stands by itself in a unique genre all its own.

This one-of-a-kind novel, fusing reality with fiction, provides powerful examples of the people far from the front lines. As the first installment in an upcoming trilogy, Confessions of a War Child’s unique mix of fiction and reality is certain to resonate with readers around the world.

About the Author: Chaker Khazaal
Chaker Khazaal is an international spokesperson, human rights advocate, and author. Born in 1987 during the civil war in Lebanon to Palestinian parents, Khazaal grew up in a refugee camp in Beirut. With the highest academic average and strong leadership skills, he was awarded the prestigious Global Leader of Tomorrow Award from York University, Toronto, Canada at the age of seventeen. An accomplished spokesperson on social media, refugee affairs, and global cooperation for developmental projects, he has been invited to venues around the world, such as Google Headquarters and the United Nations. He is regularly featured on-air and in magazines, film, television, and interactive digital media in Canada, the United States of America, the Middle East, and Europe. He has also successfully been published in print media on an international level. After the devastating loss of a friend during the summer of 2012, he began penning his story, which is inspired by the true stories of war children. 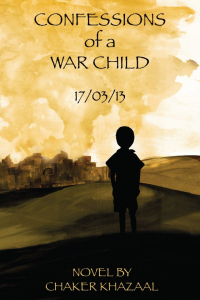