Congo Spirit of Darkness by Allain Ngwala and Mayi Ngwala

Historic slavery, reincarnated as modern-day slavery in sadistic human trafficking, plagues the people of the Congo.

Severna Park, MD -- (SBWIRE) -- 02/15/2013 -- Historic slavery, reincarnated as modern-day slavery in sadistic human trafficking, plagues the people of the Congo. The Ngwala brothers would like to feature an article in your magazine. They hope to educate and boost awareness on Congo’s struggle through the release of Congo: Spirit of Darkness, an alternative history fiction novel.

“We have sex slavery, we have wage slavery, and it is primarily a slavery of girls and women,” said Secretary of State Hillary Rodham Clinton. “And I take very seriously the function of the State Department to lead our government through the Office on Human Trafficking to do all that we can to end this modern form of slavery.”

The Democratic Republic of Congo (DRC) ranks as Tier 3 in human trafficking, which means the country does not fully comply with the minimum standards and is not making significant efforts to do so. Akin to historic slavery, much of today’s slavery encompasses “use of forced labor for mineral extraction and military operations”. As of late and according to the U.S. State Department, 116 civilians from 13 villages in Walikale area were abducted and fell victims to human trafficking. Yet business continues as usual in a country that has been plagued with civil wars and a people left to fend for themselves without much of a voice.

Though coauthors and brothers Allain Ngwala and Mayi Ngwala debut novel, Congo: Spirit of Darkness, centers on historic slavery in the 1800s, they hope their novel can continue to raise awareness about the Congo and spark more conversations on the continued pillage of the people of the Congo.

Congo: Spirit of Darkness is the first in a trilogy spellbinding historically novels, based story of the darkest period of Africa’s history surrounding King Leopold II’s quest of the Congo, worldly known as the Heart of Africa. The story, told through the eyes of Susan Bailey Dawson, a retired journalist and lifelong abolitionist, is read from her memoir, whilst on her death bed, telling the tale of a journey to the Heart of Darkness and of her love interest, Captain Bison Van Lanterman—a henchman for slave traders and a devotee of the King of the Belgians.

About Allain Ngwala
Allain Ngwala was born in Kinshasa, Democratic Republic of Congo and moved to the UK as a young man to pursue his studies. He worked as an IT and Clinical Data consultant for over ten years. He lives with at their home in Cambridgeshire. Please visit www.allainngwala.com. Mayi was born in New Orleans, Louisiana, and grew up in the Democratic Republic of Congo. A graduate of the University of Maryland with a degree in Accounting, Mayi has led a successful career in the financial industry for fourteen years. Mayi was trained in the art of storytelling by mentor, noted writer, and Iowa Walk of Fame inductee Earl D. Blakesley, Jr. Mayi lives in the United States with his wife and their two sons. Please visit http://www.mayingwala.com.

Genet Press is a publishing company founded and managed by the husband and wife team, Mayi and Nakia Ngwala. Genet hopes that portion of the proceeds from the sale of the book will “pay it forward” by benefiting the people of Congo who have fallen victims to human trafficking through their outreach initiative and through partnerships with charitable and non-profit organizations.

For a review copy or interview request, please visit http://www.genetpress.com or contact: info@genetpress.com 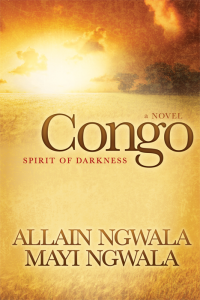