Lawrence, KS (KS) -- (SBWIRE) -- 09/30/2013 -- Friends of the Kaw (FOK), a conservation group focused on protecting the Kansas River, is anxiously awaiting the public notice on a draft Environmental Assessment (EA) on Kansas River sand and gravel dredging. The U.S. Army Corps of Engineers is expected to release the notice in early October.

FOK is concerned about elements of the ongoing environmental assessment process. The Corps is not carrying out the assessment itself. Instead, the dredgers are paying a private consultant to provide a report to serve as the basis for the Corps’ draft EA.

“Through the NEPA process, the Corps of Engineers has an obligation to be skeptical about the conclusions of the dredgers' hired consultants,” said Mark Dugan, FOK’s attorney. “The Corps needs to exercise independent judgment, and it should not simply define down what environmental impact is 'significant.' As a permitting agency, the Corps' job is to protect and manage waters, not to protect the industry it’s regulating."

“We are concerned that the dredgers paying for the draft report injects a troubling note into what otherwise appears to be an open, transparent, and impartial process that protects the public interest,” said Laura Calwell, Kansas Riverkeeper and FOK executive director.

Once the Corps issues the draft EA, they will then hold a thirty-day public comment period. They will also hold an open house for public reactions to the EA before developing a final version.

However, if the Corps concludes in a “Finding of No Significant Impact” as a result of the EA process, then the Corps will not pursue an Environmental Impact Statement (EIS). The problem is that the lack of an EIS would clear the way for a massive increase in private dredging on the Kaw. The Corps is expected to issue their final decision on the November 2011 proposal for five private dredging companies to increase dredging on the Kaw by close to 50%, from 2.2 million tons to 3.2 million tons by the end of the year.

“The EA is key to the dredging decision,” said Calwell. “Yet the EA is at risk of being compromised.”

Longtime residents of Kansas City, KS have confirmed that sand bars were common place on the Kaw through Kansas City, KS. For the past twenty years there have been NO sand bars east of the K7 bridge over the Kaw to the confluence of the Kaw with the Missouri River – a twenty mile stretch of the river.

The river has been dredged for over 100 years through Kansas City, KS and currently six of the eight dredge permits are located in this reach. Only two of the permits are active. The other two active dredging permits are just below Bowersock Dam in Lawrence and above the Seward Access Ramp in east Topeka.

Beginning in 2012 Friends of the Kaw received a grant from the Water Protection Network to work with the Kansas State University Rivers Systems Research Group to monitor and study dredge operations on the river. In year one of the project the active dredge hole east of Topeka in the Kansas River was surveyed on three separate occasions using an ADCP (Acoustic Doppler Current Profiler), an instrument that uses Doppler waves to sense the water and river bottom.

The first survey, in October 2012, established that the dredge hole depth was approximately 33 feet deeper than the nearby channel of the Kansas River The average river water depth at the time of this survey was only about three feet.

After a dry winter with no flows capable of transporting large quantities of sediment, the dredge site was resurveyed on June 16th, 2013. This repeat survey revealed a substantially larger dredge hole. It appeared that the dredging operation had extended laterally to mine directly into a large sand bar.

Although the dredge hole expanded in area, the maximum depth remained the same.

The current position held by the dredging industry is that the river will eventually just fill the holes dredged out in the mining process. However, the K-State study is indicating that dredge holes migrate both up and down river and permanently damage the bed of the river. Dr. Melinda Daniels, now of the Stroud Water Research Center but still directing the K- State study, has stated:

In-channel mining dredges dig holes deeper than any natural pool, causing bed and bank erosion both up and downstream. The native fish populations eventually wither and disappear. Although still a beautiful and wild river in its upper reaches, the Kansas River is on this sad trajectory. The Kansas River is on the brink of a permanent change – a change in state from an already impacted, yet remarkably resilient and still wild river, to a controlled ditch.

Friends of the Kaw (FOK) is a nonprofit 501(c)(3) organization whose mission is to protect and preserve the Kansas River for future generations. Check out our website at www.kansasriver.org.

Friends of the Kaw - Logo 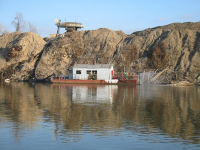