Buffalo, MO -- (SBWIRE) -- 08/27/2013 -- The Constitution Party is making a bold statement by inviting a former State Representative to address delegates at the 2013 Fall National Committee Meeting in Denver, Colorado. While Americans continue to watch Washington politicians wrangle over how much to weaken our national standards, Rep. Davis will be discussing the right way to navigate through the murky water of immigration policy while keeping our standards of integrity intact. “Our goal is to be fair, honest and Constitutional, not just political. If the national government fails us, another safety net can come through the states.”, Davis said. The former Missouri State legislator, the first recipient to have earned the distinction of being the most Constitutional Member of the General Assembly by the Locke & Smith Foundation, is bringing her constitutional solutions to the people postured and ready to make a difference in the destiny of our country.

Illegal immigration affects all of us. “Regardless of whether the problem is created by incompetence, ignorance of the law or misguided efforts to bribe voters, it is the primary duty of our national government to secure our borders and protect our citizens. ”, Rep. Davis said about the current condition. Further, she believes, “We are the conscience for all officeholders on every level and will continue to speak the truth about the duty of our elected officials to fulfill their constitutional obligations to protect and defend our country and the rule of law. When we blow away the clouds of political pandering, the solutions become crystal clear” As we sit back and watch our melting pot boil over and crime rates spiral upward, it is important for answers to emerge. Rep. Davis has the answers and will be sharing what worked in Missouri as well as what others can do to create pressure on Congress to act with honor.

Rep. Davis is directing her presentation toward inspiring Constitutionists everywhere to take action and engage in the public debate over the immigration policies being defined currently in Washington D.C. Her example is about not sitting back in silence while the political parties in power trash our nation. “Hiding in a cave might sound safe, but we need to honor the legal immigrants because they have followed the law and our rules while we provide security for all residents.”, Davis said. The Constitution Party will be meeting September 27-28 for their Fall Meeting.

About Cynthia Davis
Representative Cynthia Davis served as a Republican in the Missouri State Legislature until she was term limited. During that time she was appointed to be a majority floor whip and proposed pro-life, pro-marriage, pro-taxpayer and “Tenth Amendment” legislation. She also was the Chairman of the Children and Families Committee. After joining the Constitution Party, she ran for Lieutenant Governor on the Constitution Party ticket in 2012. She is now the host of “Home Front” radio show on Missouri Grassroots Radio Network and publishes a weekly electronic newsletter embracing current civic concerns. 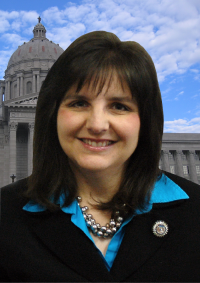