Birmingham, West Midlands -- (SBWIRE) -- 08/20/2015 -- A recent report has highlighted that The Consumer Goods Forum (CGF) has announced its commitment to tackling the issue of global food waste, aiming to half the waste produced within the operations of its 400 manufacture and retail members by 2025. This emphasizes the scale of the effort being taken to increase efficiency and reduce the amount of potentially fit food being thrown away. Britain's 'Love Food, Hate Waste' campaign is a further example of focus upon sustainability, buying and eating habits.

The issue of wasted food has received increased publicity in recent years – with a number of incentives for households to reduce their output. Food waste from homes is a significant problem, not only in terms of the cost and loss of produce, but also added issues such as vermin and more waste on landfill. Yet the key reasons for such high levels of wastage often go unaddressed. For example, the poor storage of food items often leads to spoilage and them being discarded before they are even used or cooked. It is anticipated that in light of the CGF announcement, more measures will be encouraged at a domestic level, to reduce food wastage of this kind.

About Betterware
Betterware are key providers of homeware and outdoor goods, as well as a range of kitchen and storage innovation which prioritize the proper storing of food products. They were quick to comment on the recent news.

"We think that the illustration of commitment to food wastage reduction by the CGF is a highly positive thing," A spokesperson said "The reduction of waste in the kitchen is something we aim to incorporate in our products at Betterware. From tins and containers with air-tight seals to extend shelf-life, to products which help with the efficient cutting of vegetables – there is a solution to minimize mess and excess. We would encourage people to browse our range; they may well be surprised by the simple solutions they can use to make themselves more efficient and economical in the kitchen. This allows people to keep as sustainable as possible in their kitchen practices." 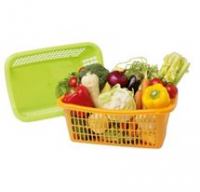