Classic Show Chevrolets and Major Vendors from Across the Country March 9-10, 2013 at the George R. Brown Convention Center

The Chevrolet specific event serves as an ideal platform for leading professionals in the industry to interact with customers who attend. There are prominent companies that exhibit at the show, displaying and marketing different types of accessories, parts, performance systems, that are related specifically to Chevrolet models. There is plenty of Chevrolet memorabilia and automotive logo apparel for sale as well.

Not only featuring Corvettes, the Corvette Chevy Expo has exceptionally stunning Camaro's on display. Keegan Chetwynd's owns one of those Camaros. His truly remarkable L72, 425 HP 427 1969 RS COPO Camaro is a highly desirable car. The 1969 COPO Camaro is famous for its power and is considered to be a Blue-Chip investment for Muscle Car Collectors.

It would not be Texas, without the Chevrolet trucks! Grabbing the attention of spectators, Steve Harris, displayed his Wild Custom 2005 Silverado. This truck will make your jaws drop! The wild front doors open to 180-degrees, decked out in custom paint with a chopped top ridding on 30-inch Lexani wheels.

“We are proud to be back in Houston for our 35th Annual Corvette Chevy Expo,” said Bill Wolf, CEO of Vette Vues Magazine and the Corvette Chevy Expo. "This show not only has some of the best cars in the south, but also features a large selection of commercial vendors from across the country selling Chevrolet products. We are excited to announce the expansion of our footprint in Texas. We will have our inaugural event in Dallas at the Dallas Market Hall, September 28, 29, 2013."

The Corvette Chevy Expo is open to the general public beginning Saturday morning at 9 AM and closes at 7 PM. On Saturday, the children can meet and have their photos taken with costumed characters Elmo, Dora the Explorer and Batman from noon until 3 PM.

Sunday hours are from 9 AM until 6 PM. Sunday also features the Miss Corvette Chevy Expo Bikini Contest and the Miss Swimsuit USA Model Search starting at 3 PM followed by the Awards ceremony at 4 PM.

Celebrating their 35th anniversary, the Corvette Chevy Expo will have 35 drawings throughout the weekend in which spectators can register for free. There are food concessions on site, for a full day of enjoyment.

Tickets are available at the door for only $15 and $25 for the weekend. Children 12 and under are free. If you want to be part of this event as a show car, commercial vendor, or Car Sales Mart, you can contact us direct at 386.775.2512 or email us at info@corvettechevyexpo.com. For more details, please visit our website at http://corvettechevyexpo.com/ 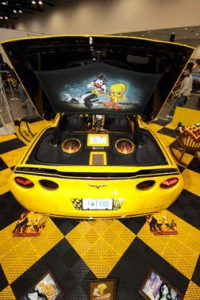