Cupertino, CA -- (SBWIRE) -- 01/17/2013 -- Pavacic Graphics has launched a new app in the iTunes store. Dubbed “Create your Headline”, this app enables the users to use their photos and frame editors in making them look humorous and funny. Users can use the existing photos in their galleries or they can take a new picture from their mobile camera to use this app on. App users can use fillers and props on their pictures like hats and moustaches to make their photos look funny. The app serves to be a great entertainer when it comes to sharing the creative photo creations with friends and family over Facebook, Twitter and through email or through text. The app is named so as to make people their photos their headlines.

The new app lets users make their own stories and news added with creativity and technology along with social network sharing. The features of the new app in the Apple’s iTunes include easy to use interface that is incredibly user friendly. There are magazine frames and newspapers to modify them as per their requirement in the photos. With the help of this app, users can edit the headings, subheadings and titles of news papers according to their need in order to create their own story.

The users can change the font sizes and styles as per their requirement to make them in accordance with the news information they are breaking. The users of iPhone can use any photo whether it is in their cell phone or taken freshly from their camera. The app gives great flexibility to its users by enabling them to turn the badges and props left and right, and also to make them of an appropriate size. Colors of these props can also be changed according to the requirements.

The photos that are worked upon and edited are saved in the device and can be shared with others over the networks like Facebook and Twitter. The iPhone users can also share their creations via text and via emails. The new app is focused on making the headlines of user’s choice where they can edit and customize any cutting from a news paper or a magazine making it the news that is either funny or amazing for the people they share them with. People who have the honor of being the first users of this new app are looking forward to spread the good word about it as it is deemed very popular. 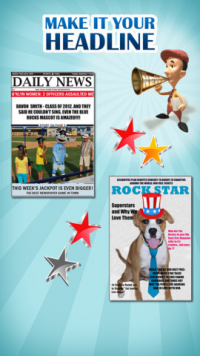 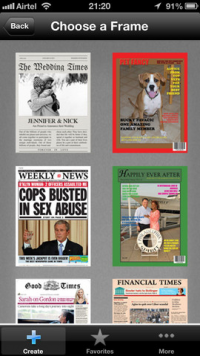