In South on Pacific Coast Highway, Author Gary Paul Corcoran reveals a side of Laguna Beach even locals rarely see.

Laguna Beach, CA -- (SBWIRE) -- 07/29/2013 -- Known to the world as an affluent seaside resort town and artist community, many see Laguna Beach as an idyllic paradise. However, author Gary Paul Corcoran’s gritty new crime novel brings the area and its Southern Californian coastline to life in a more darkly graphic and unforgettable way. It’s a tale that’s fit for any beach towel and will make every vacation down to the shore a truly memorable one.

South on Pacific Coast Highway begins with Michael Devlin, the Private Detective and protagonist of the novel, learning that one of his oldest friends has been arrested for murdering his wife. Believing in Steve’s innocence, Michael sets out to clear his name, only to have three more dead bodies pile up at his feet. Add a cheating wife, a hardnosed cop, some pain in the ass Feds, a couple of nasty boys from south of the border, a Russian named Boris, a fortune teller, a miniature poodle and a billionaire whose name mysteriously pops up everywhere Michael looks and you have the ingredients for a story that will grip you from start to finish.

“From the moment you first open the pages of South on Pacific Coast Highway and slip into the beachfront bar at the Surf & Sand Hotel, you can expect to be captivated both by a stirring crime tale and the backdrop of a charming beach town,” says Corcoran, who has been hailed the #1 rated literary provider on Guru.com.

He continues, “Picture hot summer nights, with all the haunts, the tangle of art fairs, the easy wealth and especially the cast of bohemian characters that together have made Laguna so unique over the years.”

Since its release, the novel has attracted a consistent string of rave reviews.

For example, Fran Lewis from Just Reviews commented, “Author Gary Paul Corcoran and his quick-witted, daring PI, Michael Devlin keep this fast paced, suspense filled murder/mystery racing to beat the clock…A great author, a spelling binding novel and one must read! We can only hope that Mr. Corcoran is planning to bring Michael Devlin back soon.”

Carolyn Howard-Johnson, award-winning novelist and author of the How To Do It Frugally series for writers, was equally impressed. She adds, “Women will love the heart and soul of one Michael Devlin in Corcoran's new mystery novel…From page one, you’ll know you're knee deep in a crime story you can't put down!”

With the book’s popularity expected to soar, interested readers are urged to purchase their copies as soon as possible.

About Mr. Corcoran
Mr. Corcoran is the author of the previously published novel, The Trip Into Milky Way and can be found as the # 1 rated literary provider on Guru.com, specializing in novels, memoirs and full length narrative nonfiction.

The product of an Irish/Italian family, Mr. Corcoran was transplanted as a boy from the clapboard New England of his youth to the cookie cutter, stucco subdivisions that began to litter the disappearing ranches and orange groves south of Los Angeles in the 1960s. True to his rebellious nature and the folk music/coffee house idealism that helped shape his early worldview, Mr. Corcoran chose to resist the Vietnam War, was a man without a country for several years as the result and can count incarceration in a Mexican prison as one of his many colorful experiences during that era.

Having pursued a love of reading and writing in various forms all his life, Mr. Corcoran finally took this passion seriously around the turn of the millennium and has dedicated the remainder of his days to authorship. As the result of his rough and tumble experiences in life and his undying love for the fairer sex, adventure romance would best describe the character of Mr. Corcoran’s work. 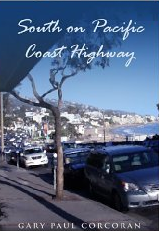