Transporting readers back to the early 1700s and into the Great Northern War, Vampires and lovers erupt into an intense and raw narrative that will excite even the most conservative of readers. Offering a literary experience like none other, ‘Crimson’s Captivation’ is resonating with readers around the world.

Ocean Springs, MS -- (SBWIRE) -- 08/09/2013 -- While it may be a social taboo to discuss openly, everyone has fantasies. From the normal and common to the weird and the wonderful, fantasy offers everyone an opportunity to explore their desires outside the constraints of everyday life. Those with an adventurous streak and a soft spot for vampires can indulge deeper into their fantasies than they ever thought possible; thanks to an explicit new book by C.B. Carter.

‘Crimson’s Captivation’ proves that when royalty and vampires clash, the conflict leads to a gripping and provocative story.

Princess Crimson, from Sweden, is kidnapped and forced into the sex trade run by a vampire named Kieran. She is sold to Tor of Russia. Crimson’s lover, Viktor, confronts a captured vampire about Crimson’s whereabouts, only to learn that she is now a captive in Poland. Viktor leaves on an epic quest to rescue his love. Meanwhile, Crimson’s new life exposes her to sexual desires and practices she has never dreamed of. Will Viktor find Crimson before she is lost in the world of erotic desires? Or will he be too late to rescue her from a fate that women of royalty fantasize about in the parlors and salons?

As the author explains, it’s healthy to safely indulge in fantasies.

Continuing, “Every woman has a right to allow herself to be swept away by a handsome prince, or become the sole purpose of one’s dying desire. It’s in fantasy that she imagines the color of his eyes, the strength of his character, and the tone of his silky-smooth voice. Fantasy helps bridge the space between our veiled urges and social norms and responsibilities.”

"My husband bought Crimson's Captivation for me as a fluke. I jumped him when he came home. Great read. Four out of five stars,” says Kristen L.

Megan S. was equally as impressed, adding, "Vampires, werewolves, royalty and a great historical setting. What is there not to like."

Carter studied at St. Leo College and the University of Maryland while a USAF non-commissioned officer that included service in Saudi Arabia during Operation Southern Watch. He spent much of his youth with his grandparents, uncle, and aunt near Roanoke, Virginia, where he was exposed to classical music and the great writers of the 50s and 60s.

Carter‘s writing style has been called epic, religious, and intellectual. Chaos Theorem was his first novel. Other novels in order of release, The Whippoorwill’s Song, The Path to KnowWhere, Crimson’s Captivation, and Project Northwest. Books in various publication stages are: Seated Beside The Wolf and Moth’s Want For The Flame. Books in progress are The Last Sedition and Animus: An Interview With A Killer. 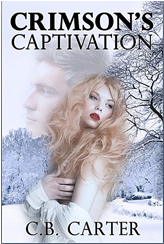