Unolingo Poised to Be the Next Great Puzzle

After only a few short months, Unolingo, a new word puzzle created by Equazi Enterprises is spreading like wildfire across the globe.

West Bloomfield, MI -- (SBWIRE) -- 03/12/2012 -- Equazi Enterprises reports that Unolingo, a word puzzle and mobile application launched in December, is already being played by thousands across the globe.

Not since Sudoku has a new puzzle shown so much initial interest. Available on all iOS and Android devices including NOOK Tablet and Kindle Fire, Unolingo celebrated its 10,000th download in less than three months. Players from all 50 states and over 80 countries around the world are fascinated with the challenge of this new puzzle, which was profiled at the recent Silicon Valley Puzzle Fest, and will also be featured at the upcoming American Crossword Puzzle Tournament to be held in Brooklyn this month.

Unolingo went live in December and is rapidly climbing the app charts for word games and puzzles. This new brain-teaser is a 10 x 10 crossword puzzle without clues and 26 empty squares that require the precise placement of each letter of the alphabet. As simple as it sounds, a Unolingo comes in four difficulty levels and can only be solved with word knowledge, logic and deductive reasoning.

According to Ian Mailing the puzzle’s creator, “Unolingo is poised to be the next great puzzle. Its great success is attributable to its simplicity, its appeal to all ages, and its mind bending stimulation. Unolingo can be played competitively or collaboratively, enhances word knowledge and spelling, and offers a fun way to learn English.”

Unolingo is available on iPhone, iPod touch, iPad, NOOK, Kindle Fire, and all Android devices. This fascinating word puzzle app allows puzzlers to compete against time, track performance statistics, and offers unique “hint” and “audit” capabilities to ensure that everyone is successful in completing a puzzle. Users can select a preferred level of difficulty and download hundreds of new puzzles with ease.

Equazi Enterprises, founded in 2008 and headquartered in West Bloomfield, Michigan, is committed to the creation of new puzzles and games that stimulate the mind and provide entertainment to people of all ages. For more information, please visit unolingo.com. 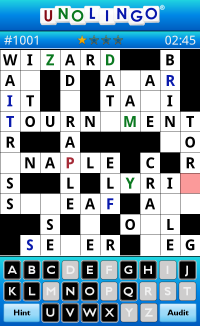