CTN - The Genesis. New Action & Adventure Novel Poised to Take Readers to the Page-Gripping Edge of Their Seats

Fusing classic adventure with subtle humor and suspense, ‘CTN – The Genesis’ is quickly fighting its way to becoming this year’s biggest action release.

Fargo, ND -- (SBWIRE) -- 08/10/2012 -- For those who love action, the literary world has recently provided a non-stop adventure of new releases. However, none are quite as hyped as the “Criminal Termination Network” series, brought to bookshelves by Michael Dakota and Free News Network, Inc.

While he’s been writing professionally for over two decades, the Criminal Termination Network is Dakota’s first foray into the world of fiction. However, if the series’ first book is anything to go by – there are decades of success ahead.

CTN – The Genesis evolves from a simple carjacking gone wrong. During the investigation and hostage rescue it becomes apparent that those in charge of national security are using the system to their advantage. Set in the near future where video surveillance, body scanners and intelli-streets are more and more common, what if key employees in charge of monitoring these systems starting taking advantage of their access? Many of today’s post 9-11 fears play into a story that is fast paced, action packed and guaranteed to take readers on the ride of their lives.

Since the scheme involves so many corrupt officials across multiple law enforcement agencies, a new Elite Team must be formed to stop them. The Criminal Termination Network - CTN is formed by Mayor Mark West (whose wife was kidnapped) and his father in-law, a former Marine Colonel. The Colonel recruits members from his black ops team who he led in Afghanistan a decade and a half prior to the incident.

Those with a thirst for thrills will need to buy the book to find out what happens next. While it is tipped to become the best-selling action series of the next few years, author Michael Dakota makes a stark admission.

“I actually came up with the idea for this very original story over a decade ago. However, I had never written fiction before and don’t even read it for fun!” he explains.

Continuing, “However, this puts readers in the perfect position. They get a surprise-packed novel that is written by a long-time wordsmith with none of the pre-conceptions or clichés that traditional fiction authors may inject.”

Although the book has only just hit the market, it has been received with critical acclaim. Many are praising Dakota’s seemingly useful lack of fiction knowledge to produce a truly original story that doesn’t try to satisfy any of fiction’s traditions just for the sake of it.

CTN – The Genesis, published by Free News Network Inc, is available now in electronic Kindle format from Amazon.com. Members of the media can receive a free copy by sending their name, publication they write for and their Amazon associated email address to pr@freenewsnetwork.com through Wednesday August 15th.

To find out more about the book, its upcoming series and read the first 3 chapters free, please visit:

About the Author: Michael Dakota
Michael Dakota grew up on a farm out in the middle of nowhere. The boredom caused by the lack of social interaction led to a well-developed imagination. After graduating from college in 1988, Michael began writing marketing copy and financial newsletters. Seeing the obvious growth of the Internet he began writing and publishing online in 1996.

Over the years he has developed thousands of pages of content and created over 150 content based web sites. On May 8, 2012 Michael decided it was time to develop a fictional story that had been rolling around in his mind for over a decade.

After only a couple weeks of writing he made the determination that this was his calling. His first series CTN (The Criminal Termination Network) launches Aug 8, 2012 and will be followed up by a second series in the Romance genre by the end of 2012. 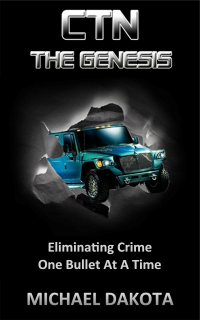