Fusing the magic of Harry Potter with the heart-stopping adventure of Indiana Jones, writer Robert Clark Selby provides a foray into the unexpected, with his new series of young adult fantasy adventure books.

Fayetteville, AR -- (SBWIRE) -- 10/03/2012 -- Decades of releases have proven the captivating appeal of spell-binding magic and thrilling adventure. Fusing both themes into what could be the perfect literary cocktail; Robert Selby is delighted to announce his new series of fantasy adventure books.

Aimed at young adults, the ‘Michael Hawk Adventure’ series lifts readers into a world very different to their own. The first installment, ‘Curse of the Last Moondragon’, is the perfect introduction to the life of Michael Hawk and his family of circus friends.

Suddenly alone and hunted by shadowy henchmen he never knew existed, Michael Hawk has no choice but to run. But where? Why? He’s only twelve. His only worthy possession is an autographed baseball cap. He's never even been in a town populated by more than 500 people. But somebody wants him, and they’re willing to leave a trail of dead bodies to capture him.

After eluding the dark hunters for months, Michael unwittingly plunges into a daring rescue of a magical, flying circus from a ravenous monster. For the first time in his life, Michael has a real home and a family. But can he keep them? Danger and disaster seem to follow him wherever he lands.

Hailed as a hero and then cast out as a traitor, Michael begins a quest to prove his honor and save the circus owner, Lotus Moondragon, from an insidious curse and an ancient witch named Grimcoven bent on revenge. From an orphanage that would make Charles Dickens squirm to the badlands of South Dakota to a shrouded island in the South China Sea, Michael must battle a mysterious cult, a maniacal zombie pirate, mystical creatures, and his own unknown past to free Lotus from her horrific fate.

As the author explains, the world and concept he devised is a work of art in its own right.

“My world boasts a series of compelling facets. From the depths of the Great Depression to the fall of bombs at Pearl Harbor, Michael Hawk must discover his true identity, escape the clutches of a brutal organization desperate to enslave him and defeat the terrible power he himself unleashed - all against the backdrop of a world teetering on the brink of global war,” Selby explains.

He continues, “My aim is to provide an exhilarating journey for readers of all ages. With six more books in the works, many new adventures await.”

Critics are praising Selby for the rich world he has developed, and the adventures that take place within. Poised to inspire and work the imaginations of all of its young readers, the series is tipped to stake its place as a literary classic.

To view the book trailer, go to http://www.michaelhawk.com

About the Author: Robert Clark Selby
Robert Clark Selby was born in Iowa City, Iowa on a reasonably nice December day in 1971. Sometime in the afternoon so as not to be too big of an annoyance to his parents. He was a considerate infant and the second of two only children.

Robert and his wife currently live in Fayetteville, Arkansas in a lovely two-story home that is transformed in the fall to a totally awesome Halloween House because his wife really loves Halloween and Robert really loves his wife. 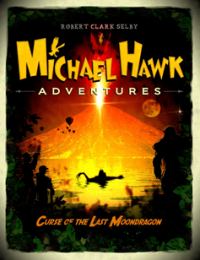