Clearwater, FL -- (SBWIRE) -- 05/15/2012 -- It’s a game that has experienced massive interest over the last few years, particularly in the college and beach sets. With its origins shrouded in mystery, Cornhole – the game in which players attempt to score by landing bags filled with corn kernels in a hole in a board – has recently started to take the nation by storm.

Initially popular within the college community as a fun leisure activity, Cornhole has been growing in popularity year on year. Now, tournaments abound all over the nation in which players of all skill levels can test their mettle and enjoy a great day of fun, food and drink.

Custom Corntoss, a company which allows Cornhole enthusiasts the ability to purchase custom cornhole boards online, has recently announced their support of the leading event in the 2012 Cornhole calendar, this year’s much anticipated Sand Blast Cornhole Tournament.

Held on Saturday June 9th in Rocky Point, Florida, the Sand Blast is an exciting and friendly tournament catering to all skill levels of Corntoss enthusiast. Located at Crabby Bill’s, players will find themselves competing on the sand with a stunning view overlooking Tampa Bay. Playing for over $2000 in cash and prizes, the Sand Blast 2012 is a great opportunity for friends to come together and enjoy a fantastic day of fun, sun and Cornhole!

The tournament itself would not be possible if it weren’t for the team at Custom Corntoss, a leading provider of quality cornhole beanbags and boards. Producing a huge range of completely customized Cornhole products including first class boards and bags, Custom Corntoss have become one of the leading lights for the burgeoning Cornhole community. To further support their customers and Cornhole fans generally, the team at Custom Corntoss has begun to sponsor an ever-increasing number of Cornhole tournaments and events across the state. In this way, more people than ever before can enjoy the excitement and camaraderie of Cornhole, all thanks to the unwavering support of Custom Corntoss.

So for all those looking to enjoy a fun day of Cornhole on the beach, the upcoming Sand Blast tournament brought to you by Custom Corntoss is just the ticket. With a stunning view of the ocean and a fantastic array of cash and other prizes up for grabs, the Sand Blast 2012 is the perfect expression of the game of Cornhole.

About Custom Corntoss
Custom Corntoss is a specialist provider of custom Cornhole bags and boards. Operating since 2004, the Custom Corntoss team is passionate about the game of Cornhole, recently extending its support of the burgeoning Cornhole community by providing sponsorship and support to a wide range of Cornhole tournaments and events in the Tampa Bay area. For those seeking the best quality custom Cornhole products, it’s impossible to go past the team at CustomCorntoss.com. For more information, visit http://www.customcorntoss.com 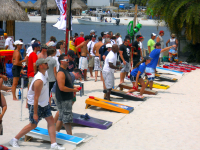