LJM Publishing announces the publication of another novel for youth ages 8-12 by best-selling author D. Ann Nadeau. Devil’s Cave, Pirates and Legends Series Book Two is now available for purchase on Amazon.com in both paperback and ebook.

Dallas, TX -- (SBWIRE) -- 10/16/2017 -- Best-selling author D. Ann Nadeau has completed Devil's Cave, the sequel to 'The Legend of Abuela Rose,' the first novel in her award-winning series Pirates and Legends.

Into the port of Miracle Hill sails White Bird, laded with more than the typical cargo. The impressive ship also hides secrets. Secrets the soon-to-be mayor of Miracle Hill, Eduardo Rodrigues, a former pirate, would just as soon forget.

If revealed, those long buried secrets threaten to destroy Eduardo's marriage, his children, and the entire village he has worked tirelessly to build.

Hoping to piece together the clues that will save all they love, Lilianna and Juan Carlos, the Rodrigues children, together with their runaway friend, risk their lives as they begin to unravel the mystery buried deep inside a mountain in a place called Devil's Cave.

From the Publisher: "This fun and adventurous book is a worthy sequel to the best-selling novel The Legend of Abuela Rose. Readers of that book will also love the adventure, suspense, and danger incurred by the three children who are determined to solve the mystery and save the village and their families from the evil Captain Valdes. Young readers will insert themselves into the mystery, attempting to help solve it, as their hearts pound faster with each new suspense-filled event," said Jan Myers.

About D. Ann Nadeau
D. Ann Nadeau is the best-selling author of So Many Miracles (2014) and The Legend of Abuela Rose (2014). Prior to becoming an author, Mrs. Nadeau performed on stage, in movies, and as a stand-up comedienne as well as teaching high school drama classes. Her perfected sense of humor and timing is reflected in her writing, adding to a well-developed plot, dynamic characters, and engaging dialogue. She is available for interviews.

A press kit including photos is available at http://DAnnNadeau.com/Press-Kit.

Devil's Cave is available now on Amazon.com. The price is $12.97 for the paperback and $4.97 for the ebook in formats readable on all tablets and pc's. 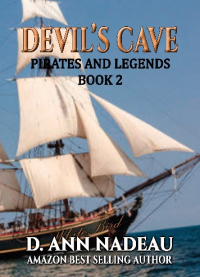