Written by Christopher Bennett, the powerful uniquely fuses fact with fiction to illustrate a fierce real-world war between the highly educated and the less sophisticated within the African-American community. Through a fictional yet heartfelt story of one father’s struggle with the current judicial system, ‘Daddy Doesn’t Want to Dance Anymore’ will resonate with readers from coast to coast.

Chicago, IL -- (SBWIRE) -- 09/13/2013 -- While the United States still faces complex issues when it comes to diversity and equality, millions are unaware of the silent yet potentially deadly ‘war’ that is currently playing out within the nation’s African-American community. Through a compelling narrative, author Christopher Bennett melds fiction with fact to expose these battles and kick-start the conversation they deserve.

‘Daddy Doesn’t Want to Dance Anymore’ shines a vital spotlight on the African-American family and its response to judicial, political and educational injustices.

This is a book composed to shed some light on the two worlds that are currently at war within the African American Conmmunity. A war that is wage between the highly educated and the less sophisticated African American. Who's right or who's wrong is not the question, for both sides raises valid points in the defense to justify its existence. Instead the question is how can the two come together to ensure a possibility of survival as one.

This is a compelling fictional story that takes its reader on a historical journey through the judical, educational, and political disparities that has played a profound impact in the destruction of the African American family.

This story touches upon the importances of family structure no matter whether it's inside or outside of the home by emphazing the dire need of having both parents being actively involved during the crucial early stages of their childrens' development.

As the author explains, his narrative aims to draw national attention to issues that currently get little, if any attention.

“This story displays the complexities and diversities within the African-American community that so many of us are unaware of. It’s rare that we as readers come across a story that sheds light on the struggles single fathers are facing in the judicial system. Through my story, we are granted the opportunity to hear about the breakup of a marriage or relationship where children are involved from, a unique male perspective that displays the painful effects it inflicts upon the father and his children,” says Bennett.

Continuing, “Everything in the book stresses the importance of the role the father plays when it comes to maintaining the family structure and stability within the family unit. This is vitally important because it stresses the necessity of having both parents involved in the development of raising their child no matter whether they are together as a couple or apart.”

Critics praise the author for his steadfast efforts to make a difference to the African-American community. However, according to Bennett, it’s his duty.

“Someone has to stand up, expose the issues and try to affect change. Literature is a powerful lobbying vehicle and I’m confident that, if as many people as possible read my book, that change can become a reality. It’s a collective effort and the responsibility lies within each of us,” he concludes.

About Christopher Bennett
Christopher Bennett was born in the late sixties during our nation’s most radical period of its time, which can explain why he composed one of the most controversial novels in his debut as an author. Christopher was born in Utica, New York but spent most of his years growing up in Cleveland, Ohio raised by a single mom along with his younger brother. Growing up in a middle-class blue collar community on the outskirts of Cleveland with his mother and spending weekends and long summers in the inner city with his father, Christopher was able to experience the two worlds that divided the African American experience. The two worlds were like night and day where at times he would struggle to see just where fitted into the equation because on one side of town Christopher was considered to be Black but on the other of town he was teased for looking and acting White. Though painful at the time, it would turn out to be a useful tool to help navigate within the two worlds of the African American experience freely.
By Christopher’s early teens he moved to California, which was a melting pot compared to Cleveland when it came to the multiple diversities. However what didn’t change much when it came to defining the African American experience. Due to the fact that Christopher was able to travel from one end of the nation to the next, it enabled him to grasp a better understanding of this topic for his book. Because Christopher not only witnessed these experiences on a first hand account, he too was living through it in his own personal life.

This book I put together isn’t just a story about two individuals going to war defending their personal views, instead it’s my own personal struggle of dealing with the two sides that are battling within me. People don’t truly understand the division within the African American community nor do they understand the division that we as African Americans deal with on a day to day basis with ourselves individualistically. 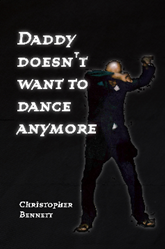