Descartes Biometrics is a US-based technology company committed to the design, development and marketing of biometric authentication solutions for the mobile sector.

Mobile Device Security has been plagued by problems. PINs/Passwords are easily lost, forgotten, stolen, shared or even hacked. ERGO (patent pending) is an ear biometric authentication technology available to end user consumers as a lock screen solution for Android smartphones as well as a software development kit (SDK) for enterprise customers looking to add a biometric layer to their mobile applications.

Allen and Boczek met initially at the recent CES (Consumer Electronics Show) in Las Vegas this past January. Both Industry Mavericks agreed that there is a need to stay open-minded and innovative with Mobile Device Security.

“Descartes is continually exploring the limits of mobile applications. That kind of innovation is the exact kind of ‘thinking’ that needs to start leading in this space. We expect most Siam Users to be able to use ERGO to setup their biometric security within a few moments.” – Darius Allen

The Siam Smartphone is the new dual-screen Smartphone offering to compete with the newly launched Yota Phone manufactured in Russia. Siam will also include dual operating system options (Android and Windows Mobile), two high-performance speakers and ear buds by 50Cent’s SMS (Studio Mastered Sound). ERGO is scheduled to be installed at the factory as Siam Firmware.

“We are excited to work with Siam, especially as they launch a new and incredibly innovative product. Biometric lock-screen applications offer unparalleled levels of device security without compromising convenience – it’s really at the forefront of mobile device security. Descartes Biometrics sees a world free of PINs and Passwords and a world where your identity is your key.”
– Michael Boczek, President and CEO, Descartes Biometrics

The Siam Smartphone featuring ERGO by Descartes Biometrics will be available in the US market late 2014 or early 2015. ERGO is currently available on Amazon and Google Play 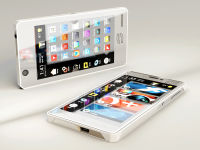