'Vetri' follows the story of a boy looking to achieve success in his life but continually fails to do so.

Leichhardt, Australia -- (SBWIRE) -- 05/05/2014 -- 'Vetri' is a feel-good animated comedy short film about a boy looking to achieve success in his life. Danan Thilakanathan made this short film in his spare time while attending Uni. People that enjoy a nice rags-to-riches story may enjoy this film. Those into random, spontaneous comedy films or feel-good films or even films to watch with the kids, this film has a fair dose of each. Hopefully, this film has something in it for everybody.

The good news about Vetri is that the short film is already complete. All that's left is adding the soundtracks and giving the film a final polish. Overall, the film has shaped up well, and should be enjoyable to watch. On May 6th, Danan will be releasing the film on his YouTube channel for the world to see.

Danan Thilakanathan’s main goal is to continue making entertaining animated short films and webisodes for YouTube. Even if his Kickstarter campaign doesn't get funded, Danan mainly hopes to gain more fans and followers who are willing to share and give feedback on his project. Their feedback and support can really help Danan improve his story, animation, modeling, etc. so that he can continue to make bigger and better short films and webisode series that people will enjoy.

Funds raised through Kickstarter will pay for
- Rendering: During the making of the film, Danan spent some money (~$200) on rendering farm services out of his own pocket. He would love to get that money back and use any extra money to cover the costs of his next film.
- Music: A soundtrack costs about $20-40 which includes the license to use the music in the film. Raised money will help pay for the background music of the entire short film.
- Advertising: Danan wants to advertise the film on YouTube and on Facebook.
- Software: Any extra money raised will be used to buy new software. 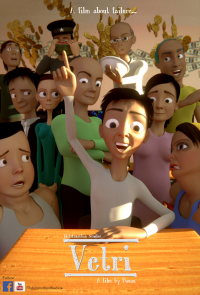