Daniel Hayes Launches a Kickstarter Campaign to Raise $10,000 to Start Production of His Own Line of Handmade Custom Furniture Made in the USA

The Demilune Chair Line Will Bring Affordable Custom-Made Furniture to the Masses.

West Jefferson, NC -- (SBWIRE) -- 01/03/2014 -- Daniel Hayes has been building furniture for almost nine years and building custom furniture for nearly four of them.  Guiding his way has been his furniture design degree from Appalachian State University.  Through his experiences he’s been hard at work creating designs with quality materials that are also visually appealing and functional.  Mr. Hayes had found that custom furniture is very expensive putting it beyond the reach of most consumers. This inspired him to build furniture that anybody could afford which got the cogs in his mind spinning. He’s been working on his Demilune design for almost a year and his crowdfunding campaign with Kickstarter is the next step in realizing his dream.

The chair is called the demilune chair because demilune means half moon and is so named for the half moon shaped cut outs in the legs. The key aspect to the Demilune chair is the wide array of choices consumers have such as headrest type, armrests, wood choice and upholstery color.  This way consumers can customize their chairs while keeping the manufacturing process streamlined as the basic frame is the same on every one.  Another important part of his idea is that the buying process needs to be just as streamlined the manufacturing process.

Mr. Hayes plans on accomplishing this optimized procurement and manufacturing business model by offering his Demilune chairs with limited production runs, which, most importantly, will retain the handmade quality at affordable prices.  If a piece has a minimum of say fifty pieces, the pieces will not be run until 50 have been sold.  Mr. Hayes doesn’t expect it to take long to sell fifty pieces so as not to leave customers waiting too long to receive their orders.

The funds from Kickstarter will be used to refine the manufacture process through a test run, and get the system going into full production. 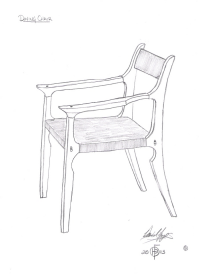 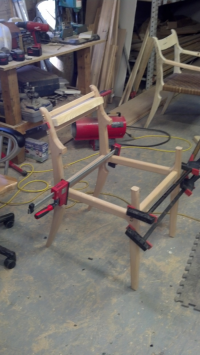 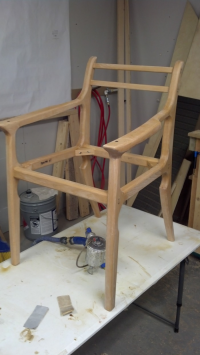 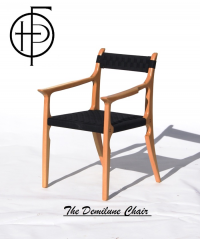