A young man races home to save his family from the 1938 alien invasion, as Orson Welles’ “War of the Worlds” has him fearing the worst.

Los Angeles, CA -- (SBWIRE) -- 03/27/2014 -- Actor Daniel Marin (TROPHY WIFE / GENERAL HOSPITAL) will make his directorial debut with THE BROADCAST. After hearing how Orson Welles’ radio broadcast of “The War of the Worlds” was perceived by listeners, Daniel knew there was more to the story.

He became fascinated by the idea that an entire country could believe something they heard on the radio so strongly it caused panic among them. This movie has been in Daniel Marin’s head for over 20 years, subconsciously putting the images together, imagining and re-imagining each and every scene, and growing more and more in love with the story as time passes. He had to turn this into a movie somehow. It was only recently that Daniel wrote the screenplay for THE BROADCAST - a fascinating tale that people around the world are familiar with.

Unfortunately short films like this are difficult to finance; it is a period piece, the costumes, props and most importantly, the truck, all need to be authentic to 1938. The film takes place at night, and involves heavy lighting set-ups as well as special effects and stunt work. There are many wonderful, people are donating their talent, time and efforts to help this get made, but they need to raise some actual dollars to pay for everything else. 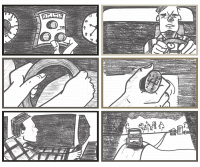