The powerful new picture and story book by Barrington G. A. Dyer fuses powerful role models and runaway imagination to tackle one of society’s biggest problems – bullying. ‘David and the Wizard: Something about Bullies’ is just the first in an upcoming series that has already resonated with readers from coast to coast.

Clermont, FL -- (SBWIRE) -- 12/12/2013 -- While millions of parents kiss their children goodbye each morning, only a tiny proportion ever become aware of the destructive bullying epidemic that has swept the nation and the world. Wanting to tackle this problem at the source and do it in a way that helps children retain their precious dignity, author Barrington G. A. Dyer is delighted to announce the launch of his new book.

‘David and the Wizard: Something about Bullies’ discards dry and preachy lessons to instead empower children to take a stance on bullying without ever realizing they are learning.

The story takes place on a remote island, named JA. It is about a young boy, named David, and his vivid imagination as you will see. No matter what he is doing or where he is his imagination always take over. I tell you, one moment he is talking to a tree to get directions, and the next he is saving two dragons from doom. He even has time to be a superhero, who save-the-day. There isn't anything beyond his imagination.

So, where does the Wizard come in, well he lives deep in the forest of this island. He helps David deal with his life. He does this by the use of his magic and of course the animal kingdom. Once a week David goes to visit the Wizard, and tells him of what might be bothering him or on his mind. The Wizard, sits, listens, and comes up with ways to help David. Together they solve David's problem. Oh, by the way, the Wizard's name is Diyah, and what David does not know, is he has a secret, and David is going to help him with it.
As the author explains, his book tackles a reality that is destroying the lives of children everywhere.

“Bullying has always existed but, with today’s technology, it is a problem that has gotten more than just out of hand. It now needs to be tackled at its source; the very core that can turn a child into either a compassionate good character, or an evil bully,” says Dyer.

Continuing, “However, sitting children down and hammering home life lessons won’t work. They need to learn in a fun way that stimulates their growing minds. That’s why I wrote this series – to subtly give children the tools and confidence that could one day change their own life or the lives of others. It’s chock-full of everything children love, including animals, magic, adventure, wizards and myth”

Due to the success of this book, Dyer is delighted to announce that he has further books in the works.

“Upcoming titles in the ‘David and the Wizard’ series include ‘Finders Keepers’, ‘Why do Things Happen’, and ‘To Tell The Truth’. I’ve also got adult books in development such as a fantasy book titled 'Prophecy of a Planet' and a Science Fiction book by the name of ‘A.C.O.I. A Conflict of Interest’. In short – there is plenty more to come!” he adds.

Until then, ‘David and the Wizard: Something about Bullies’ is available now: http://amzn.to/1cnV4Ic.

About the Author
I was born in Jamaica West Indies, and came to the United States at a young age. So I know something about bulling. Went to school in Jamaica Queens New York. At the age of sixteen I discovered that I had the ability to tell and write stories. So I started, my first attempt to write my first book. At the age of nineteen I joined the US Navy (Active). Then later I went into the US Navy Reserve, and then transferred to the US Air Force Reserve to continue my carrier in the military. I am now retired with twenty-eight years and a few months. In between I had other jobs, but the one thing that kept me going is my stories. I never stop writing. If you believe in something put God before it and it will always work out. Never stop believing in yourself, because if you do everything stops. Thanks for buying my books, and God bless. 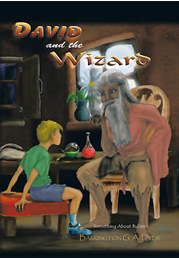