David Arthur Clark Seeks $50,000 via Kickstarter for the Trees: A Suspense Film

A bold suspenseful thriller capturing the true evil of domestic abuse on a visceral level.

Los Angeles, CA -- (SBWIRE) -- 09/24/2014 -- The synopsis of this suspense film is something far outside of the ordinary; Following a horrific act of violence, a tormented mother finds herself seeking refuge from the very man responsible; her estranged husband. As she experiences evil on a realistic level, a series of strange unexplained events start to unfold in the surrounding trees of her home. A supernatural evil appears to have spawned from the event of her domestic abuse, forcing her to protect her and her daughter from an unimaginable evil.

The Trees is a feature film steeped in suspense that addresses real life horrors and challenges everyone faces at one point or another in life. Inspired by the storytelling power of Stanley Kubrick and Alfred Hitchcock, writer and director David Arthur Clark wanted to focus on something visceral and real that everyone is aware of on any of several dimensions including the social, the psychological or perhaps something even more personal.

The Tress chooses the societal challenge of domestic violence. The story pits something so gritty and realistically terrifying against the evils of a supernatural force with an ending nobody will see coming.

Putting his art where his mouth is, Mr. Clark has included trailers to his crowdfunding campaign to give potential backers a no-holds-barred preview of the suspense and horror they’re in for before they decide they’re brave enough to become a crowdfunding backer to this project.

Everyone is invited to subscribe to the Vimeo channel where filmmaker David Arthur Clark will give away his insider tips, tricks and processes achieving that cinematic "filmic" look on a Canon DSLR using his Feature Film "The Trees" as an example.

This film will be set in modern day, taking place primarily in southern California. It will have a cinematic style that studies characters and their surroundings (think Terrence Malick), beautifully directed and realistic portrayal through poignant dialogue before turning into a gritty supernatural environment. The color scheme will convey some of the warm saturation of California but as the film progresses we plan to reveal a darker, grittier tone for scenes leading up to the climatic end.

Crowdfunding is sought to complete production of this film including everything from professional sound design, mixing, more camera lighting equipment/rigs, festival submissions and possible distribution deals. Stretch goals include reaching out to marquee actors with supporting roles, who have already shown interest in being in the film. 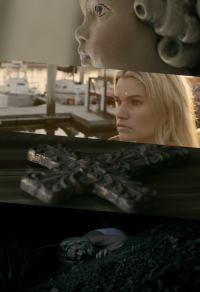