A work of enlightenments and hope, the book attempts to explain the mysteries of the origins of the universe, the evolution of humanity and the creation of the mysterious sites across the globe such as numerous pyramids, temples, and ancient structures.

Queens, NY -- (SBWIRE) -- 07/17/2012 -- "Day of Forgiveness" is a New Age science fiction work, recently announced by Paul Anthony. The novel follows Tobias Sinclair, a former lawyer-turned-writer who is profoundly affected by an unpredictable series of events that suddenly transforms him from being an isolated observer of human history into a central participant of events that would ultimately lead to the New Age itself.

Following a head injury, Tobias becomes an accidental genius who develops a compulsion to explain the mysteries of the past, present, and future. He refers to his insights as "The New Science" and is suddenly able to explain unsolved questions in physics, biology, other sciences and religion. He eventually makes the decision to start a school to teach his newly discovered insights to a larger audience. Eventually, his school becomes a forum in which he not only offers courses online, but he initiates a weekly internet, radio, and cable television program explaining the New Science.

On his program, Tobias is often confronted by physicists, theologians, politicians, and other experts who feel threatened by the New Science. Although his insights are often harshly questioned and criticized, they could never be proven wrong.

During his lectures, Tobias encounters a man named Stokes who, much to Tobias' surprise, privately revealed that he (Stokes) is the son of UFO abductees, and that he resides with extra-terrestrials, humans, and hybrids on a spacecraft who are actively involved in the surveillance of the humans of the Earth. Stokes implores Tobias to limit the information revealed by the New Science lest it be misused by humans.

Tobias decides to heed the words of Stokes, and channels his insights into a campaign promoting a "Day of Forgiveness" to focus on individual, group, and international peace and harmony. Despite this success, Stokes returned to warn Tobias of impending danger from people who did not fully understand the true meaning of the New Science. Tobias ultimately makes a heart-rending decision to ensure his own safety, and to help secure the progressive destiny of humanity.

“The characters in the book represent a variety of ideologies, ethnic groups, races, genders, nationalities, and sexual orientations. The story even includes extra-terrestrial and hybrid beings,” explains Anthony, who is celebrating the launch of his second novel.

He continues, “There will, hopefully, be a character in the book with whom the reader may be able to identify, and perhaps come away with the idea that we all have more in common than we have differences.”

Above all, Anthony hopes that the book could help shed some insight regarding the best direction in which our species should go.

“If we, as human beings, could recognize that we have probably been down our current technological path one or more times in the past (as indicated by the Mayan calendar 'long count' which measures prior civilizations from thousands of years ago, for example), we could possibly choose to move forward in a different, more insightful, and progressive direction,” he concludes.

Day of Forgiveness is self-published and is available at the author’s Official Website.

About the Author
Paul Anthony is a native New Yorker who had previously published a science fiction novel, "Love, Light, and Labor" in 1995. Interestingly, his 2012 book, "Day of Forgiveness", serves as the prequel to the first novel, and completes the story of the main character, Tobias Sinclair.

Paul Anthony is also a board certified physician who has written multiple scientific research papers that were published in peer-reviewed medical journals, including articles on AIDS, lupus, and genetics. He describes himself as a seeker of truth, a teacher, a friend, and a human being who strives to be a creature of reason. 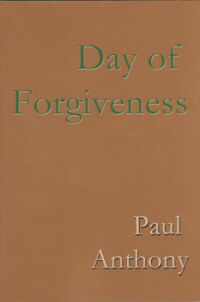