Emcee/Producer duo Rise-Ascend & Direction have been earning the attention of the hip-hop community since the release of their debut album – “Hurry Up, Tell The World” (2011), by bringing it back with their rejuvenating and fresh sound. The two set themselves apart by uniquely revitalizing that vintage old school, positive hip-hop vibe while innovating their own distinct sound, which incorporates new school Electro/Dance/Pop production techniques, in addition to more classical and traditional musical influences.

Their latest single “Epic” from their “Epic” EP, now on pre-sale, is an awe-inspiring song about reaching your potential. Rise explains, “When you have a message that’s from the heart and you put everything into your art, your mind, body and soul; when you present it to the world, it’s epic.”1 Other cuts on the album tell the stories of others in his community, and address human rights issues the world over.

Rise-Ascend, an American rapper based in Washington D.C., formerly worked as a commercial transactions attorney before devoting himself to music. When he’s not writing and performing music, or taking care of his family, he’s often raising awareness about human rights violations, especially the persecution of Falun Gong in China, something that has affected him personally, having experienced his friends and acquaintances being persecuted.

Direction, based in Sweden, is the producer half of the duo, who also produces music for an international radio program while not crafting innovative sounds for the duo’s latest projects. Direction’s production is immensely versatile, bright, inspiring and powerful- seamlessly infusing classical, traditional and ethnic sounds along with pop and futuristic synths, driven by strong and masterfully crafted percussion.

With the upcoming release of their latest project the “Epic” EP on August 6th - on Ingenious Records, based in Miami, Florida, Rise-Ascend & Direction are poised to bring positivity back to hip-hop and the music world in general by sharing their bright, optimistic and informative signature style and sound. 2 Buy it now at https://itunes.apple.com/us/album/epic-ep/id679506482 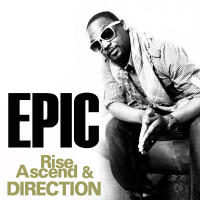