With a bold focus on character development, ‘Deadly Intentions’ is rapidly proving that fantasy novels can be about more than swords and statistics. With its far-reaching accessibility, the book is resonating with readers around the world.

Regina, Saskatchewan -- (SBWIRE) -- 05/14/2013 -- While the fantasy genre is currently one of the most widely-read among fiction’s spectrum, the category does have a reputation for largely ignoring the development and descriptions of its characters. However, a new book by Canada’s David Temrick is breaking new ground by taking a more traditional approach to modern fiction.

‘Deadly Intentions’ retains the intricate character development that has charmed the world of storytelling for centuries.

War has broken out in the Seven Kingdoms. From small conflicts between long time friends, to open siege warfare in the country Tristan Vallius was entrusted with; Terum. A bold mercenary leader has seized control of the capital of Terum and while Tristan wages war to free his country from the shackles of oppression, a deeper conspiracy is taking form.

Meanwhile, now that dragon magic has returned, the elder dragons struggle to bring balance to the world. Bethis, a powerful youngling dragon has had her growth artificially accelerated in order to provide Terum with a patron to offset the ecological damage that continues to ravage that country. Even as she comes into her power, she and Tristan face a growing unrest to the north.

The remnants of the Draconis' Bane cult have found a new and much more dangerous leader who is more than willing to make alliances with the most lethal and murderous races known to the world of Amesdia. Time is in short supply and the fate of thousands rest on the shoulders of an inexperienced dragon and a deeply troubled Prince.

As the author explains, he wants to offer more than the ‘regular’ fantasy novel.

“The fantasy landscape has become so entrenched in this mind-set that nothing innovative is ever accomplished. I see no reason why fantasy novels can’t be accessible to a wider audience more interested in character development and exciting story progression rather than statistical analysis for a board game release,” says Temrick.

Continuing, “The recipe is never changing; books are done as trilogies, names are incomprehensible and have more umlauts than vowels, swords are described in pain-staking detail but the characters get a broad and generalised anatomy.”

Critics praise Temrick for the efforts he is taking to return the fantasy genre to literature’s finer roots. With new novels in the pipeline, the author is set to become a dominant force long into the future.

‘Deadly Intentions”, the conclusion to the “Blood Feud” saga is available now: http://amzn.to/12mwO5Y

About the Author: Temrick
Temrick's been writing short stories and novelettes since his father gave him "Treasure Island" for his 6th birthday.

While his stories were always for personal enjoyment and those of his friends and relatives, his wife convinced him that he should share his gifts with others. 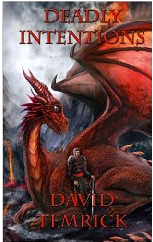