Written by Nick Sacco, ‘Death Card’ tells the gripping story of a U.S. President who fakes a national emergency in order to launch a private Army against the American public and suspend the Constitution. In a bizarre turn of events, many of the ideas created by Sacco two years ago have since become a reality today through the Obama administration.

New York City, NY -- (SBWIRE) -- 09/13/2013 -- Two years ago, Nick Sacco started writing a book that was chock-full of far-fetched political disasters and a purely fictional account of the United States spiraling out of control. However, as if the news media read the book and reported its narrative to the world, many of the book’s ‘far-fetched’ disasters have since become a detrimental reality on President Obama’s watch.

‘Death Card’ has since evolved to become a prophecy-like novel that warns of the consequences of a Government suspending its constitution and imposing martial law on its citizens.

A US president mad with power declares himself dictator, suspends the Constitution and declares war on the American public.

Unleashing a reign of terror the United States citizens find themselves victims of a tyrannical ruler harsher then Stalin or Hitler. In the Midwest the general of a nuclear armed Air

Force base fights back and members of the DEATH CARD militia rise up to challenge the president's private army.

Read DEATH CARD today before it is banned by the government TOMORROW!

As the author explains, what started as a creative story in his own head has since become a real possibility for the United States.

“Even though I began writing this book two years ago it is very relevant to what is happening in the US today. Several events written in DEATH CARD over the past two years have come true. What began as pure fiction has become a frightening reality with many far-fetched ideas in the book coming to fruition,” says Sacco.

Sacco continued, “It’s literally as if the nightly news copied the events right out of the book and turned them into news stories. The current Presidency is the most unpredictable and dangerous our nation has ever seen – and it appears that many Conservatives’ worst nightmares could quickly come true.”

While he hopes to share DEATH CARD with all of his readers, Sacco knows that his book’s public life could be short.

“There’s nothing stopping the Government from banning this book tomorrow! It’s going to appear to them as a devastating exposé and I can wholly imagine them shutting the iron gates down on its publication. Read the prophetic book DEATH CARD now – before it’s too late,” he adds.

With the book causing much controversy, interested readers are urged to purchase their copies immediately after launch.

‘Death Card’ is due for publication October 1, 2013. For more information and to keep abreast of the latest news, visit the author’s official website: http://www.acephantom.com.

About Nick Sacco,
Nick Sacco, served in the United States Marine Corps where he was trained to be a silent but deadly USMC sniper. Nick is also a retired police motorcycle officer from Kansas City Missouri. He is a proud ultraconservative and an American patriot who travels full-time across the country, constantly remaining off the grid and outside the reach of government spying and intrusion. Nick Sacco is an at-large member of the United States Marine Corps League and former Commandant of the Kansas City, Missouri Detachment.

He was also the founder and President of the first Fraternal Order of Police Chapter in Kansas City, Missouri. Along with his smoking hot girlfriend Marcy, Nick remains on the move, seldom remaining in the same location for more than a few days, and always vigilant of government threats to our freedoms. 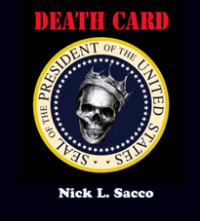