Richard Smiraldi masterfully shakes up a cocktail of suspense and intrigue that proves even the elite class in America are not immune from demons. Follow Manhattan novelist Montgomery Clark as his Parisian wife goes missing, the man he calls on to help him also vanishes, and voodoo-riddled time travel becomes the only chance of hope. It’s all a race to discover the truth before Mont himself becomes the suspect. Don’t worry about settling too far back into that easy chair, because readers will only be needing the edge.

New York, NY -- (SBWIRE) -- 10/03/2014 -- Manhattan’s private social clubs are awash with the region’s elite; scholars, entrepreneurs and hereditary millionaires that band together to run the city through glasses of single malt and newspapers with stories that most don’t understand. Okay, let’s quash these stereotypes right now; author Richard Smiraldi has visited almost every club in Manhattan – drawing from his experiences the inspiration for a novel where society’s elite are far from lucky.

‘Death and Disappearances’ is intricate, fascinating and wholly-unique. Readers travel from the streets of New York to Paris, while a psychological undertone of crime, deceit and even voodoo throws more than the odd twist into the fray. Unravelling the mystery behind a missing wife isn’t easy.

Death and Disappearances is a psychological thriller. Young, rich and promising novelist, Manhattanite, Montgomery Clark, “Mont.” has had one un-successful book, and an interesting marriage to Petula Beaujolais, a Parisian artist he met while attending Columbia University. They’d been married about two years when life as they know it began to unravel. Petula was unhappy because Mont didn’t take her career as an artist seriously. To make matters worse, Mont belongs to that elite class of first American families –to which Petula could not find acceptance. After a heated argument at a club function on Gramercy Park, Petula leaves their apartment at 2am in nothing but her sable coat and a pair of fuzzy pink slippers –never to be seen or heard from again. Did she go back to Paris to visit her twin sister at the asylum (Clarenton)? Where is she? Mont elicits the help of his friends Bea, and Peter. Bea discovers a cancerous lump on her throat and is advised by her psychic root worker to leave the country. While rushing to his parents’ home in Westchester, Peter’s Astin Martin careens off the cliffs of Bear Mountain and crashes into the Hudson River. With nowhere else to turn, Mont files a missing person’s report with Detective, Draza Vicaru, (a first generation American of Slovakian descent and a Coney Island resident). Together, with the help of Bea’s psychic and a little time travel, Mont uncovers the truth about the disappearance of Petula Beaujolais-Clark and the deaths that surround it.

“Mont simply wants to find his wife, but gets more embroiled in the calamity than he could ever have imagined,” says Smiraldi, who also wrote the popular novel ‘Seven Murders in Sussex’. “Two weeks after the disappearance, he wakes up with a bump on his head, a dead sparrow in his dresser drawer and a note in his own handwriting that reads, “You killed my sister, now I’ll kill you”. Will he be able to solve the mystery before charges are laid against him for the disappearance? Well, you’ll need to buy the book to find out”

Continuing, “I’ve frequented every private social club in Manhattan and can confidently say that the clientele are just as normal as anyone else; going against the grain of the myth that members are lucky rich folks who only experience life’s best. I thought it would be interesting to write a novel where the plight falls onto a guy society deems to be privileged. As you’ll discover, adversity is boundless.”

Readers have left overwhelmingly-positive reviews. For example, Wandaro comments, “OMG! Talk about a story with twists and turns. I’m not kidding. Once I got through the first three chapters, I couldn’t put the darn thing down – and had to go in to work sleepy. This book kills. Ask my husband. I’ve been exhausted for days.”

About Richard Smiraldi
Richard Smiraldi holds a degree in English Literature from The King's college. He has been a member of The Salmagundi Club in New York City and on the entertainment committee, which allowed him to visit practically every private social club in Manhattan from which many of the details in this novel are gleaned. He published mystery novel, ‘Seven Murders In Sussex’, in April 201i. His readership is over 700,000 worldwide. 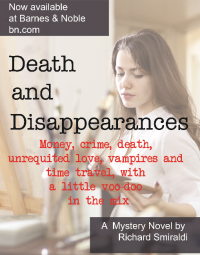