Masterfully crafted by J.R. Olivares, ‘Death on Sun River’ transports readers to Southeast Asia where one young man grapples not only with the military conflict he voluntarily signed up for to escape life back in Michigan, but the forces of evil that appear to be running the world. This highly-engrossing and insightful story straddles fact and fiction as it pays homage to the ‘misfit’ youths who gave their lives for their country during the 1960s and 1970s.

Honolulu, HI -- (SBWIRE) -- 08/27/2014 -- While the Vietnam War is a tumultuous chapter in the United States’ history books, the conflict did provide an opportunity for many of the nation’s unintentional ‘misfits’ to escape their lives and experience things that were a million miles from home. In his compelling new novel, author J.R. Olivares tells the story of one such young man’s career, and the evil he would uncover along the way.

‘Death on Sun River’ spans three decades in Southeast Asia, telling the story of the protagonist’s transpositions from young U.S. Marine recruit to a deep cover agent, a U.S. foreign diplomat and eventually a professional killer.

A young man’s life takes him through many unexpected twists and turns and a invisible war; recruited by a vicious and brutal intelligence agency and a long career in a on-going battle between twin evils and no way out.

Follow him as he ventures through this action thriller to the highest levels in government, down to the black mirrored trenches of evil. The trenches are where all things get done; fight for life, or death.

“Our protagonist hails from Michigan and wants nothing to do with the region’s assembly lines of the booming auto industry, so he instead signs up and heads off to Vietnam. Almost four decades later, he decides to quit the industry of ghost operations with some gripping stories to tell,” explains the author. “He has come to learn that there is no such thing as the “good” part in the archetypal good vs evil battle – but it’s instead the best of evil fighting against the worse of evil.”

Continuing, “He leaves his career not knowing where to turn or who he can place his trust in. He’s essentially tangled in a double cross, and the back stabbing from the highest levels of government to the lowest brutal invisible on-going war where evil men know or recognize any boundaries of humanness.”

While of course fiction, Olivares’ narrative pays homage to the millions of American men who are just like his protagonist.

“A huge cultural shift took place in the 50's right after the Korean War in 1953, and many young men no longer felt like they had a place in society. Many went to Vietnam. My narrative encapsulates all of their stories and demonstrates how their experiences in Asia shaped them for the rest of their lives.”

‘Death on Sun River’ is available now on most eBook and iBook channels:
http://amzn.to/1APb3NX

About Jose R, Olivares
Jose R. Olivares retired from U.S. government service with the Department of Homeland Security in 2012; he served as a senior U.S. diplomat Attaché’ in South Korea, Japan and Thailand between 1998 and 2007.

Between 1969 and 1971 he served honorably in the United States Marine Corps, with one combat tour as a grunt (0311) in the Republic of South Vietnam, which today is respectfully known as the Socialist Republic of Vietnam.

Over the years, Olivares has traveled millions of air mile throughout South America, Europe and Southeast Asia; he paints and writes now as a hobby.

Olivares and his lovely wife Patty retired to the Hawaiian Islands and spend their time with their five adult children, and four lovely grandchildren. 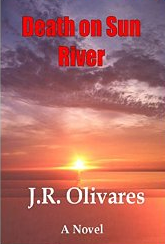