‘Old Hope Road’ may be set on a fictional Caribbean Island, but its engaging and intricate plot is no far cry from the very real consequences of modern day life.

Old Hope Road follows the improbable life of Dominic Mercy, an orphan who makes his home on a fictional Caribbean island. As Defense Attaché to the island’s President, Mercy works at the top of his game during a time of chaos and discontentment in society.

Following a political conspiracy targeting the President, an unknown group attack the Presidential palace by exploding a garbage truck within its grounds. As the conspiracy unfolds, along with the discovery of a mole within the President’s cabinet, Dominic Mercy’s childhood and rise to the highest office is revealed through a series of flashback vignettes.

As the story unfolds, his true origins are revealed and thus spark a desire to find his ‘kin’.
“The story is set a few decades into the future. While it conveys a vision of what society may have in store, it’s current enough to be extremely relevant now” says Carvalho, who drew inspiration for the book’s setting from his two years in Jamaica with the U.S. Peace Corps.

He continues, “The story touches on many current issues of today, such as the role of technology in society, politics, terrorism and protest, child abuse and even revenge.”

The book is Carvalho’s first foray into fictional literature. While his imagination ran free, the book’s cultural pedestal is based on first-hand experience.

“During my time with the U.S. Peace Corps I was lucky enough gain exposure of the Caribbean/Jamaican way of life. Therefore, I attempted to invoke Jamaican Patois, Haitian Creole, and elements of Vodun as a cultural meme and background for the story” he adds.

The self-published novel is the culmination of years of hard work. With great demand for the book on both Amazon and CreateSpace, Carvalho is delighted to see his work paying off.

“A lot of people shy away from the self-publishing route. However, I found it to be most enjoyable; a great opportunity to learn as you go. Seeing years of hard work in fruition as a completed book is extremely thrilling and something I hope to repeat again very shortly.”

Old Hope Road is currently available for purchase in both paperback and Kindle formats through Amazon.
The author welcomes fans to follow Old Hope Road on Facebook.

Old Hope Road has its own soundtrack developed by the author to accompany some chapters of the book. The soundtrack can be accessed via Spotify.

Dominic Mercy, an orphan of humble beginnings, lives in a world where anonymity is anomaly and the network is ubiquitous. Defense Attaché to the Office of the President, he juggles eco-terrorism, blackmail and conspiracy, and revenge, as a backdrop to his search not simply for acceptance, but for kin, and recognition(.) In the end, Dominic asks why it is so easy for us to accept ourselves and the world as fundamentally flawed. In unguarded moments, he dares to restate this assumption. He does not quite answer his own question, but remembers that a wise man once told him: “You are who you are and you are the only person you can be absolutely right about”.

About the Author:
Matthew Carvalho is a first-time, self-published author and OLD HOPE ROAD is his first full length novel through the CreateSpace group. His primary influences include Frank Herbert, Iaian Banks, Joseph Campbell, Greg Bear, and Neal Stephenson. He has a BA in International Relations from San Francisco State University and a Masters in Diplomacy/Global Commerce from Norwich University.

He has been, in turn, a children’s counselor for emotionally disturbed children, a US Peace Corps Volunteer, and currently works as a manager for a Silicon Valley medical equipment manufacturer.

He lives with his wife Norma (to whom OLD HOPE ROAD is dedicated) and their three dogs, Elsa, Arni and Figaro in the city of Gilroy, California. His primary hobby, after his wife and dogs, is, oddly enough, writing; although Facebook and Twitter probably come in a close second – just ask his wife! 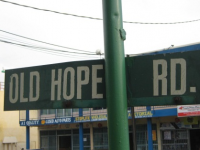