From author Joyce Nicholls, ‘The Last Egyptian Mamluk’ is the tale of the slaves who once ruled Egypt. With a blend of fact and fiction, Nicholls weaves a tale of a young boy’s destiny and a country teetering on the edge of disaster.

With her debut novel, ‘The Last Egyptian Mamluk’ Nicholls digs deep into the past and shines the spotlight on a little known historical figure – the last Mamluk to escape the 1811 Massacre of the Citadel.

“Legend has it that one Mamluk fled by scaling the Citadel walls on horseback,” says Nicholls. “When I discovered the story, it immediately sparked my imagination.”

‘The Last Egyptian Mamluk’s titular character is Maxim, and Nicholls’ book journeys with him from miserable beginnings, to his training as a ‘Mamluk’ – the Arabic word for slave, his sojourn in Nubia and his tragic return to Cairo. To many readers, the word will have little meaning, but Mamluks played a decisive and powerful role in the history of Egypt.

“To build his army, the sultanate would purchase young boys from Turkey, Russia and the Caucasus to serve as slave soldiers in Egypt,” says Nicholls. “It backfired, as they evolved into a ruthless military class, seized the sultanate and became Egypt’s aristocracy. It’s such a fascinating idea – that these slaves could cast off their shackles and become royalty.”

With her first novel, author Joyce Anne Nicholls brings to life a character in Egyptian lore surrounding the (real life) 1811 Massacre of the Citadel. The novel chronicles the life of the sole mamluk who is said to have survived the massacre. The Last Egyptian Mamluk Maxim, a young Russian boy, is rescued from a miserable life as the property of an Arab horse trader.

His benefactor takes him to Cairo and trains him as a mamluk, a slave soldier. He dreams only of glory on the battlefield but when he helps an Egyptian woman to escape from her abusive husband and tragedy ensues, it may be the first sign that fate has other plans for Maxim.

Although the book is largely fictional, Nicholls contends that it raises many important questions about modern day culture’s fascination with Egypt.

“I’ve noticed through my research that apart from scholars of Egyptian history, no one seems to know what a Mamluk was, or that they once ruled Egypt,” says the author.

Continuing: “Ramses and Nefertiti tend to grab all of the glory, but there are events in Egypt’s history that occurred much closer to our own time – like the Massacre of the Citadel, and they are largely ignored. I hope that my book can bring these events to the forefront.”

Since its publication, the book has earned glowing reviews from readers.

Matt Bailey called it ‘excellent historical fiction’ and wrote: “This is an excellent book about Egypt during the invasion of Napoleon. Lots of good history on how Egypt transitioned from the era of the Mamluks. Anyone interested in the Middle East will love this book. A lot of good romance and action on top of it.”

“I literally could not put this book down. The twists and turns were so unexpected, that I was left gasping for breath. I wish that the book was longer, because this writer really captured my interest and left me wanting more,” wrote carolk.

About Joyce Anne (J.A.) Nicholls
In search of new horizons Caribbean-born writer Joyce Anne (J.A.) Nicholls ended up in polar opposite Ottawa (Canada) where she pursued a varied and interesting career as a teacher, writer and senior policy advisor with the federal government while raising a family. During this time she escaped from the obvious by constantly asking: “What if..?” and writing down the answers in short stories, novels, essays and poetry. The Trinidad-Canadian writer holds a Master's in French Literature from Carleton University, Ottawa and a law degree from Cambridge University. Nicholls recently published her second novel The Complications of Being Jazz. She still lives in Ottawa. 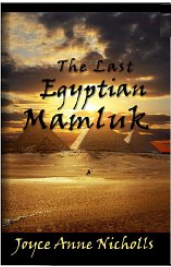